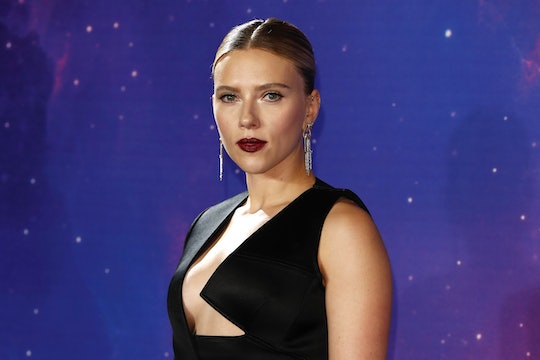 She's kicked a lot of... posterior... as a Marvel action hero, but when you're a celebrity mom, sometimes your own success is an obstacle in itself. This star has a very typical problem when it comes to having a girl, but Scarlett Johansson isn't sure about her daughter's love of princesses for this obvious, resume-related reason.

As USA Today reported, the A-lister is currently in the middle of promoting Avengers: Endgame, in which she reprises her role as ultra-tough secret agent Black Widow. (The movie hits theaters April 26 and also features Brie Larson as Captain Marvel as per film site IMDB.com.)

So it's the biggest irony that Johansson confessed that back at home, her daughter, 5-year-old Rose Dorothy, is far less interested in action-oriented characters that wear capes than you'd think she might be.

"My daughter loves fairy tale things," the actress told USA Today. "She loves girl things, princess stuff." Which Johansson seems generally OK with, but not quite as fully on board as you may expect — it's a bit of a challenge.

Stars such as Johansson have actually been critical to changing Hollywood's ideas about representation by playing multi-dimensional female characters such as Black Widow. "...There was this label put on me as this bombshell," the star told Variety in 2016 about her career before the Avengers series. "I think while it’s been flattering to be someone who is sexy, there’s something very confining about that. It implies that you’re strength comes from your sexuality."

And don't forget the actress' speech at the 2017 Women's March, where, as Newsday noted, she said, "I think people in general can sometimes forget that their rights are not ones that are just a given — it's something that you have to fight for and continue to protect, your rights to your body, to choose what happens to your body, your right to equal and fair pay." Amen, sister.

Clearly, Johansson has thought long and hard about women's rights. So it's understandable that Johansson's very professional resume might make it difficult for her to fully embrace little Rose's passion for Disney's brand of what appears at times to be Feminism/Not Feminism, at least to this mama.

"I love all the Disney princesses from back in the day," noted Johansson to USA Today, not to bash princesses or anything. "Now they’re much more empowered than some of the older, classic ones. But you’re sort of battling that a little bit, and you start to see how the dynamic of those classic fairy tale stories affect the way that your children think about the male/female roles in society. It’s very black and white."

So true, Scarlett, and something I've worried about, raising a brood full of girls myself. I never did ban Barbies, and I've certainly never pushed aside princesses, but you truly do want to provide a context for these larger-than-life characters when you're helping to develop a strong female mind.

"The whole female empowerment movement that’s going on right now feels very accessible and exciting," Johansson added to the newspaper. "My hope is that she can just take it for granted in some way that it’s just there ... just that 'Oh, girls and boys, they’re equal. We’re people.'"

Johansson took a risk by joining the Marvel universe, as the role was quite a bit different from her previous work, if you look at her credits. But it was sure one that paid off: Entertainment Cheat Sheet noted that The Hollywood Reporter reported that the Black Widow stand-alone movie, which is rumored to be in production, could earn the actress up to $15 million, though Marvel has reportedly pushed back on that number.

No doubt Johansson has shown her daughter some of her signature Black Widow fight moves... Maybe Rose can incorporate those into her next pretend-play session with Cinderella or Snow White.