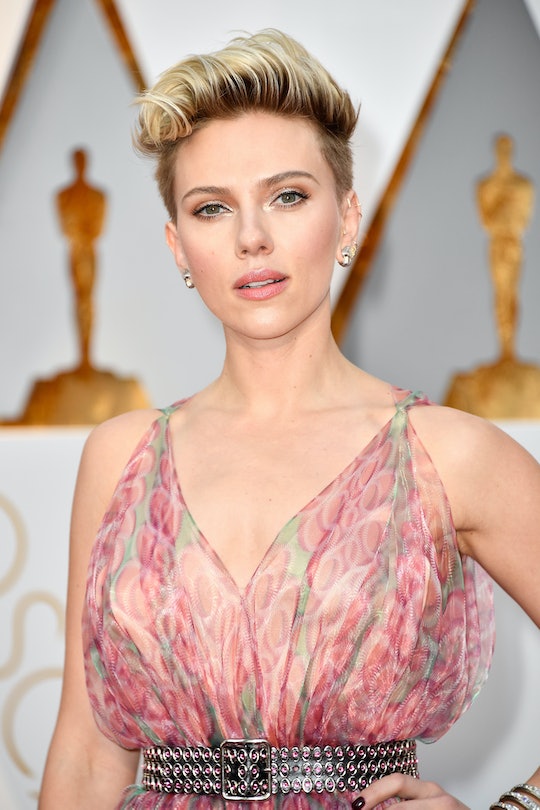 Much has been made over the last few years of the often-inane questions asked of female celebrities on award show red carpets, and the 2017 Oscars was no different. When Ryan Seacrest asked Scarlett Johansson if she practiced presenting in her heels (why would she?), she was having none of it. Scarlett Johansson shoots down Ryan Seacrest’s Oscar red carpet question, and it was great to watch.

Instead of asking about any of her upcoming or recent film projects, Seacrest chose to use his moment with Johansson on the red carpet to ask if she wore her heels to the rehearsal as well. Johansson couldn't help but laugh in response, clearly finding it to be an unexpected inquiry, before she exclaimed, "What a ridiculous question!" Seacrest then tried to save face by saying that the LA Times reported that Halle Berry wore her heels to rehearsal, but it didn't seem to have any connection to the issue at hand. Was he performing some kind of survey about how many actresses wear heels two days in a row?

Johansson's lack of patience with the question is part of a greater trend of actresses not going along with the absurd things asked of them on red carpets. Every actress who refuses to go along with a silly question draws necessary attention to the double standard between what women are asked and what men are asked.

So many actresses are subjected to the most superficial questions on red carpets, whereas their male colleagues aren't. Women are asked questions about the gowns they're wearing and how much they had to diet and work out to fit into them, instead of being asked about the reason they're there (being honored for their work) or the upcoming projects they have. It's unfair, but the fact that actresses are beginning to push back against questions like that will hopefully inspire reporters to ask them something else.

There was even a campaign to encourage less shallow questions on the red carpet called #AskHerMore. According to their official site, their goal is to "inspire people to call out sexist reporting and suggest ways to re-focus on women’s achievements." While obviously not as much progress has been made as there needs to be, these small steps get the ball rolling. The more these questions are called out, the more likely reporters will be to second guess asking them in the first place.