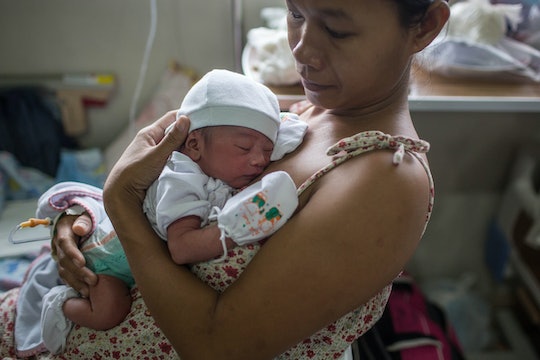 New evidence suggests that the way moms are giving birth now could have huge effects on our evolution. That's pretty wild, right? It mostly has to do with the way the generations that are now having kids schedule their births, and the medical interventions available during the birth process that other species don't have available to them.

According to an NPR story, most babies born in the United States arrive Monday through Friday between the hours of 8 a.m. to 6 p.m. — also known as business hours for most companies. This is, according to NPR, an interesting departure from our "evolutionary history as primates."

In general, monkeys or apes, with a few exceptions, give birth at night. That probably has to do with the social group being all together at that time and the reduced risk of predation as a result. But according to an article by The Washington Post, when babies are born at home (keep in mind that less than 2 percent of all U.S. births happen outside a hospital), they're most likely to be born between 1 a.m. and 4:59 a.m. So, at night, like our primate counterparts.

So what sort of evolutionary implications could our scheduled, monitored birth processes have on humans as a whole?

According to NPR, even two generations ago, babies were born at all hours of the day and night. But now, according to a piece by Mark Fischetti and Zan Armstrong for the "Graphic Science" feature of the July issue of Scientific American, more babies are born during the day. Births peak around 8:00 a.m., then rise again between noon and 1:00 p.m. That's usually when more doctors and nurses are available to assist.

Fifty percent of births in the U.S. are now pre-scheduled — by the mother and her doctor — or induced for medical reasons. So it would make sense that a lot of those births would happen during "banker's hours," as the NPR piece puts it. That's when more doctors are on call, and more staff is available for births that might have more risk involved.

Writer Barbara J. King spoke to biological anthropologist Julienne Rutherford of the University of Illinois at Chicago about U.S. in-hospital birth patterns, and Rutherford said that because human mothers often get support from members of their family or community during birth, the risks involved in giving birth during the day that our primate cousins would be concerned with aren't a problem for us. Rutherford said, according to NPR:

In comparison, most other mammalian mothers give birth alone without assistance, and most other primates show a nocturnal pattern of labor and birth. The unusual social aspect of human birth could be protective against the risks that would necessitate nocturnal birth.

We don't have to worry about predators snatching our newborns or hurting us during birth, especially with community members surrounding us. So a quiet, secluded, solitary night-time birth isn't as important to humans as a species.

Rutherford also brought up an interesting point about natural selection and the sizing of newborn's heads. With interventions like C-sections that aren't available to mammals in the wild, according to NPR, Rutherford said:

...we may very well be seeing the start of relaxed selection for a narrow range of viable head sizes, since disproportion between mother's pelvis and infant's head is less and less of a potential problem.

So more big-headed babies might be born to human mothers in the future, because we don't need to continue to evolve to have babies with smaller heads that will definitely fit through the birth canal.

Basically, because of the schedules people keep, the places they give birth, the people they give birth with, and the medical care available to people if something goes wrong during a birth, humans may be actively affecting their evolution as a species. It's not something that will be obvious overnight, but it's certainly an interesting phenomenon to consider.

More Like This
Yes, It’s Possible To Get Pregnant If You Have An IUD
Pelvic Pain During Pregnancy: What Causes It & How To Deal With It
New Study Finds Brains Of Teens Who Lived Through The Pandemic Aged Faster
Can You Give A Sleeping Baby A Breathing Treatment? Experts Explain