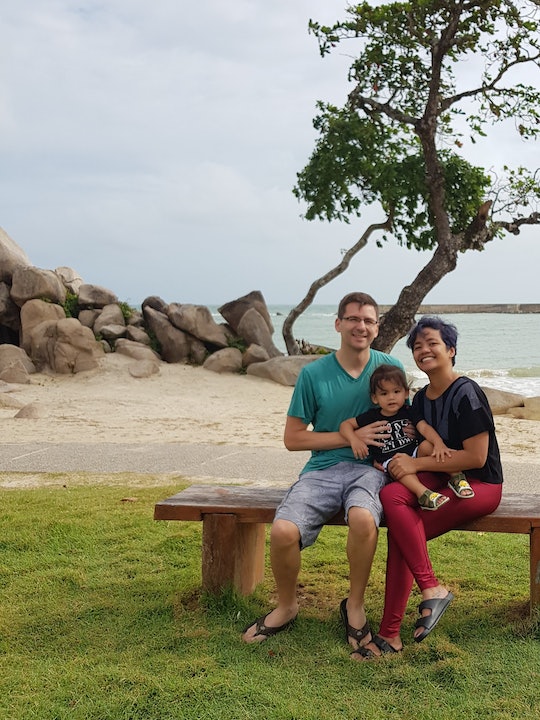 I Want Another Baby, But It’s So Hard To Schedule Time To Make One

My husband and I have been successful so far in planning our shared life milestones (and making them happen) ever since we got together eight years ago. We online dated for three months before meeting in person, waited five months before moving in together, lived together for a year in the Philippines before moving to the United States, and were boyfriend-girlfriend for a little under two years before we got married. We wanted to enjoy married life together for a while before having children, so we decided to wait. I had my son the year I turned 32, the age my husband and I agreed would be the right time to become parents. We've been able to schedule everything except for our second child.

We knew we wanted more than one kid, and we agreed to try again a couple of years after our first was born. In anticipation of my son’s upcoming second birthday, I made sure I was prime for conceiving: I got off the pill, installed a couple of apps to track my cycle, and informed my husband it was time. The thing is, life is making it hard for us to really make a baby happen this time around, and I am starting to feel a little anxious about it.

My family moved to Singapore last year, which brought about significant changes in our lifestyle. My husband, who used to work from home,is all of a sudden working a 9-to-5 job that includes lots of travel, lessening our opportunity to maximize my getting knocked up. (He doesn’t know I re-installed fertility apps on my phone, so when he told me he had to go to Tokyo for work during my ovulation period, I had to limit my reactions to a simple, “aww, shucks” so he won’t feel too bad even though deep inside I was super disappointed.)

And on top of that, you know that thing they say about how your sex life takes a nosedive after you have kids? Well, it’s sort of true. We’d be lucky to have sex two to three times a month, which is on the low side when you’re actively trying to get preggers.

Another big change since moving to Asia is the fact that we have live-in help that’s both accessible and affordable. It is a game changer! All of a sudden I have time to go out and get a manicure, or attend a yoga class every morning, or go to meetups and connect with other expat wives and not obsessively worry about chores and childcare. Last year, I was able to train properly for and finish a half-marathon, and I felt great! I felt like I could run a marathon next!

I keep an eye on my ovulation days, but don’t always have sex when it’s optimal.

Only I couldn’t, because my husband — who helped me design my training program — said I’d need at least six months to a full year to train before I did something that drastic to avoid injury, and if I had plans on being with child in the next couple of months, I’d probably be too nauseous to do a running regimen. It’s the same thing with yoga, which I was falling completely in love with to the point of being interested in going through a 200-hour certification to be a teacher: of course that sort of thing also takes serious commitment, one that will be hard to keep up with alongside a could-be pregnancy. I lasted this long postponing having a career, right?What’s another year more to give priority to producing a sibling for my son?

Because of these factors, I find myself constantly at odds with myself. I keep an eye on my ovulation days, but don’t always have sex when it’s optimal. I tell myself it’s OK to take my time and enjoy my newfound freedom afforded to me by our new living situation, that it’s OK to enjoy having regular date nights with my husband and drinking beers and champagne, but I secretly cried in the shower the first day I got my period after several months of being off birth control.

I feel like I am not trying that hard at getting pregnant because I am loving being able to do the stuff that I ordinarily wouldn’t be able to if I were knocked up, but I am also postponing a lot of personal life plans because I feel like I am ready to have another child and would rather do it now while we’re where we are and we have live-in help. It would be great to have a baby now when my family and friends from the Philippines are nearby and are now only a 3-hour flight away, as opposed to 24 hours away.

A small part of me wants to be a tiny bit selfish about my plans. I want to have my cake and eat it, too. I want to become pregnant and be able to have a passion of mine come to fruition at the same time. I want to kick ass like some of the other moms who are able to do it all — strong women who are able to keep a career going well into their third trimester without breaking a sweat. I want to be like that woman who was able to run and finish the Boston marathon fully pregnant. I badly want my son to have a sibling, a new pal to grow up closely with.

Even though I use other moms’ experiences as a benchmark for what’s possible in my own life, I do not take anything for granted. I feel very blessed to have a sweet son who loves me no matter what, a partner who supports me in every single thing that I choose to do, and a life of constant adventure and abundance.

I have a tattoo on my shoulder that says, “here & now,” and I really should remind myself of the reason why I got it in the first place all those years ago. The most important things in life happens in the present. It’s not about ovulation windows and marathons and what could happen and when. Goals don’t have to happen all at once and on a schedule, but it’s good to have them in mind. Just make sure pursuing them makes you happier.

And right now, nothing gives me greater joy than the thought of being with child again. Everything else is just icing on my already sweet cake.