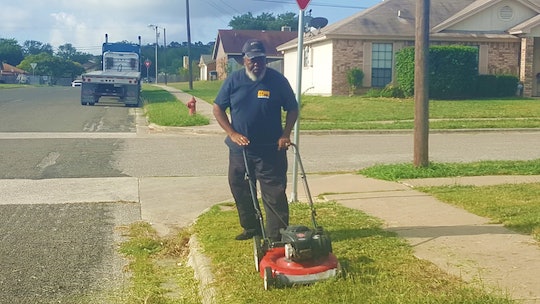 Oftentimes, school bus drivers get a bad rap when it comes to news headlines. We tend to only hear about them in cases of forgotten children on buses, or because of accidents involving school vehicles. (Which is tragic and newsworthy, yes.) However, this school bus driver cuts grass so his kids can be comfortable at their bus stop. And it's seriously a breath of fresh air.

Texas bus driver Jerry Martin noticed that elementary students at one of his stops were waiting for their ride to school every day in weeds reaching up to their waists, People reported. So the longtime bus driver decided to do something about it. He ended up bringing his personal lawnmower from home to trim the grass — and Martin's school district took note of his actions. In fact the Copperas Cove Independent School District praised him for going beyond the call of duty via Facebook

"CCISD bus driver Jerry Martin cut the grass at one of his bus stops so the students don't have to stand in the weeds while waiting for the bus," the Facebook post, published on Sept. 25, reads. "The home is vacant and the yard is not being maintained. Three cheers for Mr. Martin!"

District parents, former students, and community members flocked to the Texas school district's Facebook page to celebrate Martin's kind heart. One Facebook user wrote, "He was my bus driver way back when. He truly is an amazing person. Thank you Mr. Martin!"

Another person commented, "Talk about going above and beyond! Love that he was recognized for this GREAT deed. Thank you for caring so deeply for our children!"

Yet another Facebook user chimed in with, "What a wonderful way to show love AND compassion to his bus children."

In case Martin's good deed didn't completely melt your heart, allow me to point you in the direction of another bus driver doing amazing work. A photo of a Wisconsin school bus driver holding the hand of a crying 4-year-old recently went viral, according to Newsweek. Driver Isabel Lane was photographed comforting the anxious pre-kindergartner on his first day of school. And it's clear why the touching image captured hearts across the nation.

"This is one of our wonderful bus drivers, Miss Lane, holding the hand of a scared little one on his first day of school!" the Augusta Police Department shared via Facebook. "The compassion we see every day in our teachers, bus drivers, custodians, administration, food service staff, and paraprofessionals is truly admirable."

There's also the story of this heroic New York school bus driver who saved a student from getting hit by a car that didn't stop for the bus' flashing lights, according to USA Today. Samantha Call stopped a student from exiting the bus just in time, as you can see from the footage shared by the Norwich City School District's Facebook page.

So yeah. If you haven't done so recently — or ever — consider expressing gratitude to a bus driver when you get the chance. Because although their jobs are often thankless, their impact on our kids' lives can be enormous.