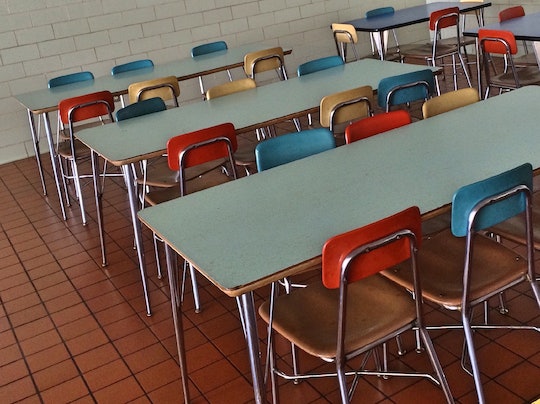 Elementary school can be tough: There's a whirlwind of social and developmental growth happening in the classroom and on the playground. There's the sadly ever-present threat of bullies. One thing an elementary school kid can pretty much count on is his or her lunch and the social hierarchy of the school cafeteria. But at one elementary school, students can't always count on a hot lunch — and that's why a Wylandville Elementary School cafeteria worker quit after being forced to take back a child's hot lunch.

Stacy Koltiska, from Canonsburg, Pennsylvania, resigned last Thursday from her position after she was told to take back an elementary school student's hot lunch from his plate. The name and age of the student has not been released. Koltiska posted to her Facebook account last Thursday explaining the specific reasons for her resignation, which was in protest of Canon-McMillan School District new school lunch policy that went into effect this year. "The first week of school on Friday, I had to take a little first grade boys chicken and give him this 'cheese sandwich,'" Koltiska wrote on Facebook. "I will never forget the look on his face and then his eyes welled up with tears."

While it might seem that giving a child any lunch at all is better than no lunch, the new district-wide policy on school lunch balances appears rather draconian when you give it a closer read. The policy reads in part:

After overdrawing the cafeteria account by twenty-five dollars ($25.00), students in grade K-6 will be able to charge an alternate lunch which will consist of a sandwich, a fruit/vegetable serving and milk.

Officials at Wylandville Elementary School did not immediately return Romper's request for comment. That the first grader received an alternate lunch at all is generous based on the limitations of the new policy. Had he been in grades 7 through 12, he would not have received any alternate lunch at all, according to the policy: "Students in grades 7-12 will not be allowed to charge any additional lunches."

It's also worth noting that, according to both the policy and Koltiska's Facebook post, if a student must take the alternate lunch, they are still charged for it at regular lunch prices. Koltiska goes into more detail on Facebook:

You don't know is that they are being given One Piece of Cheese on Bread. This isn't even being toasted. Yet they are still being charged the FULL PRICE of a HOT LUNCH that is being DEINIED [sic] to them.

As of the 2012-2013 school year, school lunches cost students $2.00 each, according to a school flyer posted on the school's website. But for Koltiska, it's not about dollars and cents: It's about human compassion, decency, and kindness. "Although it was hot and hard work," she wrote on Facebook, "I love the joy and excitement the younger children got from something as simple as a school lunch."

Kids deserve a lunch at school, end of story. But this district policy not only nickels and dimes the parents for every meal their child eats, it punishes children who have no control over whether or not their parent can afford to pre-pay for their child's lunches. In Pennsylvania alone, the number of school children eligible to receive free or reduced lunches has been on the rise, according to a PennLive piece from last year. While a $25.00 lunch card balance doesn't seem like much — it's about a week's worth of iced macchiatos at Starbucks — that $25.00 could be the determining factor whether a parent can feed their child at all in a given week.

If our schools are supposed to prepare the next generation of Americans to be good, learned citizens, what exactly are school districts trying to accomplish with policies that can deny children lunches entirely? Where's the lesson about humanity, kindness, and human decency in taking away a kid's lunch because his parents are two $10 bills and a fiver behind on their lunch payments? For Koltiska, she's hoping that her bold stand will inspire other parents and employees in the school district to raise their voices and seek to get the policy changed:

I am only One Voice but if We all Come Together and Voice Our Outrage just maybe they will change this Policy.