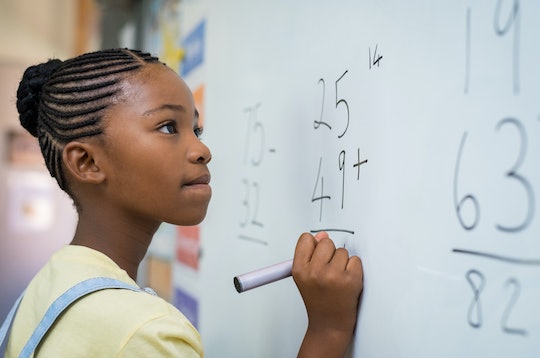 Now that the weather is warming up, school dress code violations and protests will likely be filling up your social media timelines. Most of the conversation around dress codes focuses on their perceived sexism, since they often unfairly target young women for baring their shoulder or wearing bottoms that are deemed "too short." However, a new report from the National Woman's Law Center shows how school dress codes hurt black girls the most, and some of the data is just enraging.

The report took a deep dive into school dress codes in the Washington, D.C. area, and predictably found that the rules are absolutely ridiculous, across the board. Many dress code rules are steeped in old-fashioned gender stereotypes, according to the NWLC report, such as girls being allowed to wear skirts, but not shorts, or boys being forbidden from wearing jewelry while girls can. How are non-binary or transgender kids supposed to make it past the hall monitors?

The gender issues around dress codes are bad enough, but there are also lots of policies that target black kids specifically. In 68 percent of D.C. schools, do-rags, head scarves, and hair wraps are prohibited unless it's for a religious reason, despite being staples for black hair styles. A 17-year-old girl named Fatima said in the report, "all my friends who are Muslims are allowed to wear their hijabs but because it’s a cultural [rather than religious] thing we’re not allowed to do that. And so a lot of students are upset because they said that’s being culturally insensitive. I agree.”

Dress codes are often written so that certain types of bodies are sexualized or called out by default, especially larger, female frames. According to the report, the majority of schools ban "tight" clothes or being able to see a pattern on an undershirt.

If a school has a uniform, which 81 percent of them do in the D.C. area, according to the report, they're usually often expensive. So kids from lower-income families are at a loss, too, especially if they're experiencing growing pains and last fall's "medium" is now a too-tight "small" they can't afford to replace. One girl quoted in the report recounts being sent home for a full day because her pants weren't navy blue. An entire day.

But it's not just that the rules of dress codes are arbitrarily sexist, racist, classist, and privilege smaller, thinner bodies. The dress code rules are enforced unfairly, too. And black girls are called out more often than kids of other races, according to the research. This matters — dress code infractions can add up and lead to more extreme disciplinary actions, such as suspensions or expulsions. Even if it doesn't, the time spent taking a young black woman aside and writing up an infractions takes away time she could be using to prepare for class and learn.

According to data from the U.S. Department of Education's Office of Civil Rights, black girls are just more likely to be suspended or expelled than other kids anyway, as reported by U.S. News & World Report. According to data from the same office, as Vox reported, black girls make up 16 percent of girls in U.S. public schools, but account for 42 percent of girls’ expulsions and more than a third of girls’ school-based arrests. Black girls accounted for 50.7 percent of the girls with multiple out-of-school suspensions in 2013.

This is likely due to other racial and gender stereotypes. A 2017 Georgetown Law Study found that as early as 5 years old, black girls are perceived to need "less protection and support" than their white peers. They are also sexualized earlier than their white counterparts, according to the same research, which could be why a teacher deems a black girl's tank top to be more of a violation than a white girl's (although any adult who finds any girls' shoulder or collarbone to be "distracting" should be cause for concern).

Research from the Schott Foundation found that "black girls were disproportionately suspended from middle school for behaviors that are subjectively determined worthy of reprimand," and more likely to be perceived as "loud, defiant, and precocious." This same report found that black girls tend to disengage with school at around the same time they face reprimands and what can feel like constant disciplinary action, just for being themselves. Angela Helm wrote over at The Root:

It should be noted that African American girls' bodies are often different than their Caucasian peers, and so a short skirt on a girl with curves is seen differently than one on a smaller girl. The point being it's the same damn skirt.

Dress codes already perpetuate dangerous gender stereotypes that shame young women for their bodies and tell boys that they can't, or shouldn't, control their own actions. But, as these findings suggest, they also become tools to punish black girls, which can affect their education and self-esteem throughout their lives.

Instead of pulling young girls out of class for wrapping their hair or wearing clothes they feel comfortable in, teachers and administrators should be encouraging kids to focus on what's going on in the classroom. Way too much is at stake to be that concerned with the length of someone's dress or their hairstyle.

More Like This
Real Parents Share What Time They Let Their Kids Rip Into Gifts On Christmas Morning
Festive Mommy & Me Holiday Nail Ideas To Try
If Your Kids Love Their Elf, You Don't *Have* To Put Him Away On Christmas
Spread Some Christmas Cheer In Your Child’s Bedroom