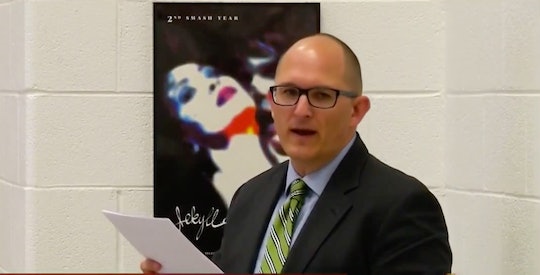 While high school can definitely be a pretty challenging place for many teens, there's so much more to deal with when you happen to be transgender. Though the need to uphold transgender rights has finally begun to be recognized in education in recent years, many transgender students still have to fight to have their gender identities acknowledged and respected. However, a Virginia school fired a teacher after he refused to use a transgender student's preferred pronouns, ABC News reported on Thursday, and, unsurprisingly, the decision has stirred up quite the debate in the community.

The school board representing Virginia's West Point High School did not immediately return Romper's request for comment, but in a statement to ABC News, board officials confirmed the termination of French teacher Peter Vlaming after "thoughtful deliberation" and noted that they were ultimately upholding the recommendation of the superintendent, which was based upon the board's non-discrimination policies.

Local ABC News affiliate ABC 8 News reported that Vlaming was fired Thursday after a four-hour public hearing that followed the teacher being placed on paid administrative leave on Oct. 31 for reportedly citing religious reasons behind refusing to refer to the student with male pronouns.

Superintendent Laura Abel told the news outlet that school administrators had repeatedly instructed Vlaming to comply with the school's anti-discrimination policy, according to ABC 8 News, but that he reportedly refused.

In an online petition reportedly created by students at the school, Vlaming was quoted as saying: "I won't use male pronouns with a female student that now identifies as a male though I did agree to use the new masculine name but avoid female pronouns. Administration is requiring that I use masculine pronouns in any and every context at school. I was informed that any further instances of using female pronouns would be grounds for termination."

During the hearing itself, Vlaming spoke out in his own defense and said he loves and respects all his students, but that he felt he was at risk of losing his job for having beliefs held by "most of the world for human history," according to SC Now Morning News, and called the move to have him use male pronouns was "coercion."

West Point's principal, Jonathan Hochman, spoke in support of the ninth-grade student, and testified that he had indeed told Vlaming to use male pronouns when referring to the student, according to ABC News. Hochman also agreed with the student's own assertion that Vlaming's attempts to avoid using pronouns at all when referring to him unfairly singled him out in front of other students, and said, "I can’t think of a worse way to treat a child than what was happening," according to NBC News affiliate WSFA.

While Vlaming argued that he had a right to avoid using male pronouns for the student, Mera Babineaux, a West Point resident and founder of the Virginia Anti-Bullying and Discrimination Action Network, wrote in a letter to the board that public schools have a responsibility to protect all students, including those who are transgender. According to SC Now Morning News, she wrote:

No matter what sense of self or identity a child may have, public schools must remain a bastion of secular education, where children can learn without fear of retribution for who they are, where they worship, who they love, or how they present themselves.

Vlaming is now entitled to appeal the decision, though it's not entirely clear whether he intends to fight it. He does, however, appear to have a fair amount of support from students and parents though: in addition to the petition, students at West Point High School also staged a walkout Friday to protest Vlaming's termination.

While it's true that Vlaming has a right to his own religious beliefs, as a public school teacher, it seems he should also understand the importance of upholding the school policies dedicated to the safety and rights of all students, particularly as he made the decision to become employed at a secular institution. And while to Vlaming and his supporters, his termination may have been an issue of free speech and religious liberty, to the student in question, it was much more likely an issue of having to feel ostracized and discriminated for simply trying to be himself.

Given the lack of precedence for cases like these, it's not surprising that the case has become so polarized. But it does seem that everyone would be better off respecting the fact that all students deserve to feel comfortable attending class.