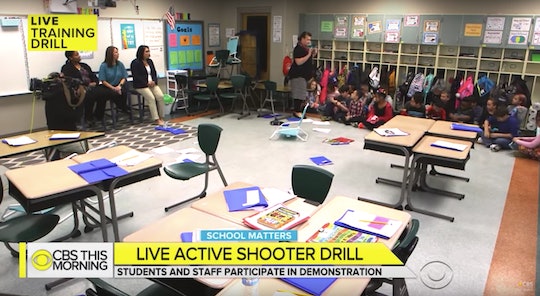 There's no denying that the United States is currently seeing high rates of gun violence. Now, this type of violence holds the extra threat of mass shootings, which have become increasingly common. A new study conducted by the Washington Post found that school lockdowns impacted millions of kids last year. Although many lockdowns were just practice, they may still be having an effect on America's kids.

And recently, a study published in the New England Journal of Medicine found guns to be one of the major causes of death of kids in the United States. Before this report, though, events like the Feb. 2018 Parkland mass shooting and the Sandy Hook shooting in Dec. 2012 showed the American public that kids are impacted by gun violence, too.

When faced with threats, schools have to respond by conducting lockdowns. Many schools practice lockdowns at least once a year. But, these safety procedures may be having negative impacts of their own.

In an analysis that included 20,000 news stories and data from school districts in 31 of the country's largest cities, the Washington Post reported that over 4.1 million students experienced at least one lockdown during the 2017-2018 school year.

That number is probably higher, because some school districts don't track lockdowns and many aren't reported as news, as Washington Post noted. According to the outlet, there are at least 16 lockdowns each school day, and nine of those 16 are due to gun violence or the threat of it.

If you've attended public school at any level within the past decade or so, you're familiar with the process of a school lockdown. Essentially, you hunker down somewhere (in your classroom or wherever you are) and try to hide.

Even when lockdowns are planned practice, they can be stressful. For students whose campuses are responding to some type of threat, lockdowns can trigger a lot.

We have very good data that children in proximity to frightening circumstances, such as those that trigger school lockdowns, are at risk for lasting symptoms. These include everything from worsening academic and social progression to depression, anxiety, poor sleep, post-traumatic symptomatology and substance abuse.

In some cases, the strategies for teaching kids about how to stay safe in the event of a lockdown will simply break your heart, as noted by Splinter. For example, kindergartners in Somerville, Massachusetts reportedly learn to chant "Lockdown, lockdown, Lock the door / Shut the lights off, Say no more" to the tune of "Twinkle Twinkle Little Star" to understand what's supposed to be done if a lockdown is necessary.

And, unfortunately, lockdowns are necessary in a climate where school shootings can occur. They may not be a solution, though. As the Washington Post's study highlights, lockdowns may be introducing some kids to a whole new level of trauma.

It's clear that gun violence needs to be taken seriously at a political level, so action can be taken for the sake of kids. Until then, however, lockdowns will likely remain an important, if imperfect, part of trying to keep kids safe.