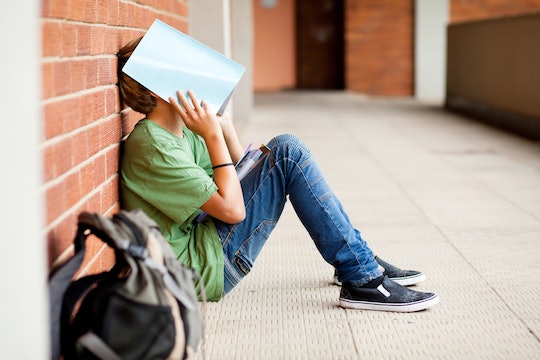 When it comes to junior high and high school, life can be brutal at times. Not only are many adolescents desperately trying to fit in and/or maintain some sort of reputation — but it seems like peers will find literally any excuse to poke fun at others. From clothing, to hair, to the way they talk, to the activities they participate in, nothing is off limits. So you can probably imagine if students knew when others were struggling in school, it would only be another potential bullying point. Well, this school policy forces kids to wear special badges for getting bad grades. And that's so wrong.

As Yahoo Lifestyle reported, Mingus Union High School in Cottonwood, Arizona is clashing with the American Civil Liberties Union (ACLU) over a policy the organization has labeled "public ridicule." So here's the lowdown: All students are required to wear student ID around their necks. Freshmen and sophomores wear red, while juniors and seniors wear gray. “These are standard badges worn by students at schools across the nation issued in large part as identification in the case of a school shooting,” Susan Segal, an attorney representing the school, told Yahoo Lifestyle. “At Mingus, older kids are allowed to leave campus for lunch, and their colored badges indicate their grade level to security guards.”

No big deal, right? Except, as the Arizona chapter of the ACLU pointed out, juniors and seniors who have failed classes — and therefore haven't earned enough credits to technically be juniors or seniors — also wear red badges, along with numbers that show their repeated grade level, if their marks don't improve. Which means, these struggling upperclassmen are essentially wearing their poor grades around for other students to see — like a "scarlet badge" of sorts, according to the ACLU.

"Not surprisingly, students forced to wear the bright-red badges have experienced increased bullying, public ridicule, and shaming by other students and teachers,” reads a letter from the ACLU's legal director Kathleen Brody to the school's superintendent, Genie Gee. The letter went on to say:

The District's 'scarlet badge' policy in which it publicly identifies and shames underperforming students, does not bear a rational relationship to a legitimate educational interest," according to a Dec. 28 letter by Kathleen Brody, legal director for the ACLU of Arizona, to the district.

The effects of publicly labeling these struggling students has been pretty apparent. According to NBC, a third-year student named Jordan Pickett is being forced to wear a red badge because she doesn't have enough credits to be considered a junior. Pickett has missed classes because of her severe anemia. “I have to go down to Phoenix to do doctor visits and all that, so I miss a lot of days of school because of it,” she told AZ Family.

“Anyone can clearly see that Jordan isn’t doing as well as expected,” the ACLU's Brody told Yahoo Lifestyle. “There has to be a way for the school to manage this without a sign on students’ chests. Jordan feels slighted by her teachers or made to feel not as smart, whereas the opposite is true.”

Upperclassmen who are missing any credit whatsoever, any credit, are immediately slapped with a red card. I said, ‘I like to study history.’ And a kid immediately chimed in saying, ‘You like to study, then why do you have a red card? That must mean you’re stupid or something.'

The ACLU has informed the the school district these badges violate the Family Educational Rights and Privacy Act (FERPA) — which keeps students’ educational records private — as well as the Americans with Disabilities Act, and the 14th Amendment of the U.S. Constitution, NBC reported. The school district's lawyer, on the other hand, has argued that a student's grade level is only considered "directory information."

It's unclear at this point what will ultimately happen with the policy. However, the ACLU hopes to avoid a legal challenge by continuing its communication with the district. "We have the very best intentions at heart and have no problem reviewing our practices," Superintendent Gee said, according to NBC.

The way I see it is this: Although this school district may not have intended for the red color and grade information on upperclassmen's badges to be used to make fun of them — that seems to be what's happening, doesn't it? And I'm sure the taunting from peers, added to the discrimination from teachers, isn't exactly helping them when they're already struggling in school. So hopefully, this issue is quickly resolved one way or another. Because a student's grades should be only between that student and their family and the school district itself.