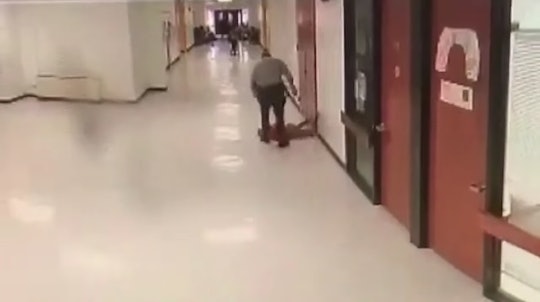 Surveillance video footage depicting a school resource officer slamming a student to the ground multiple times before dragging them down a hallway at Vance Middle School in Henderson, North Carolina, has sparked both outrage and an investigation. The officer, who is reported to be an employee of the Vance County Sheriff's Department, has since been fired and the local school district has filed a complaint against him, according to a local CBS News affiliate.

Although the footage made public Monday does not contain any audio, it shows an unidentified school resource officer walking alongside a middle school student at Vance Middle School. Suddenly the officer lunges at the student, grabbing them with both hands to lift them up and slam them down to the ground. The officer can then be seen lifting the student's body up off the ground and slamming it down for a second time. The officer then forcibly pulls the student to their feet and proceeds to drag them down the hallway out of sight. The child's mother told NBC News that he did not require hospitalization, but had a bump on his head.

"We went over and when we first saw the video, we were stunned, we were shocked," Vance County Sheriff Curtis Brame told local CBS News affiliate WNCN-TV. "We all are parents and grandparents that have children at that same age, so it brought some great concern to us."

The sheriff told WNCN-TV that Vance County Schools had filed a complaint late last week, accusing the officer of assaulting a juvenile. After reviewing surveillance footage, the sheriff's office handed the complaint over to the North Carolina State Bureau of Investigation, according to HuffPost. While the officer in question was initially reported to have been placed on paid leave following the Dec. 12 incident, two people from the sheriff's office have since told WNCN-TV that the officer has been fired.

In a statement released to CNN, Vance County Schools said they were "deeply concerned" by the officer's actions. "School and district officials are working closely and in full cooperation with the local authorities to address this matter consistent with school board policy and state laws," the statement to CNN read. "The safety of our students has been and continues to be of the utmost importance to our district."

Vance County District Attorney Mike Waters told NBC News that the incident is being considered "a use-of-force case" and will be investigated appropriately.