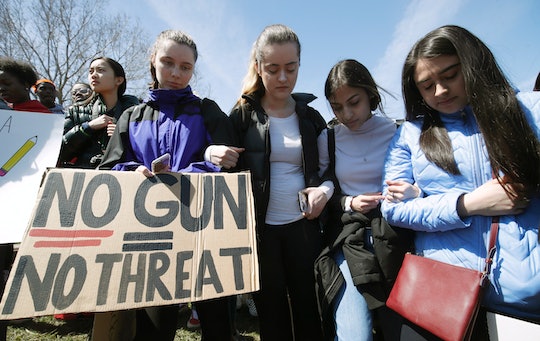 The United States has one of the most severe rates of gun violence in the world, an issue that's picked up steam as a crucial political, civil rights, and public safety issue. Even more sensitively, many of these horrific massacres have occurred in schools across the country, which is why this designer's school shooting hoodies have sparked heated backlash on social media.

While revealing its 2020 Menswear collection earlier this week, the clothing line Bstroy shared a number of models wearing sweatshirts with the names of schools where notorious gun violence has occurred. A red hoodie features the name "Virginia Tech," a dark blue one says "Columbine," a baby blue sweatshirt says "Stoneman Douglas," and a green one has "Sandy Hook" stitched across the front. All of the sweatshirts have holes in them, presumably signifying bullet holes. Many on social media found the designs insensitive and some accused the brand of trying to capitalizing on tragedies the nation is reeling from.

"Profiting off of tragedy. The dudes who are gonna wearing this hoodie aren’t activists who wanna spread awareness. They’re just tryna flex. It’s all materialism, no activism," one comment on Bstroy's Instagram read.

Another said, "This is revolting. How dare you attempt to profit off unspeakable tragedy."

One more commented, "As a Sandy Hook family, what you are doing here is absolutely disgusting, hurtful, wrong and disrespectful... Our pain is not to be used for your fashion."

"Maybe it’s their way to bring attention to better gun control," one argued. But as one said, even it the hoodies were an attempt at activism, it's "the laziest attempt at addressing a very serious issue."

One of the most compelling comments — and the most "liked" — came from one individual who explained that to use tragedy as a means of facilitating economic gain is a "prostitution" of something very serious. Furthermore, the commenter argued that it is dehumanizing in the sense that it does not make a statement regarding gun control or violence, rather, the focus remains on what was done to the victims.

"You are reducing the complexity of these tragedies to a piece of clothing. Little kids died, teenagers died, the parents, friends and families of these victims are already constantly reminded of the tragedies through media outlets, social media etc. and now.. via a bullet hole branded garment," the comment read. "This is provocative for the sake of being provocative which completely negates the underlying notion of good intent. There is a way to make a sociopolitical statement with fashion, and this is NOT it."

Fred Guttenberg, whose daughter Jaime was murdered in the Parkland shooting in 2018, was also "upset" by the hoodies. "Under what scenario could somebody think this was a good idea?" he wrote. "This has me so upset."

Another person on Twitter called the collection "disrespectful." They tweeted, "that bstroy collection is just disrespectful like put all that 'if it gave u a reaction that means its good' bullsh*t aside and realize they profiting off tragedies."

While Bstroy did not immediately return Romper's request for comment, Brick Owens, the brand's founder, shared a photo of an "artist statement" regarding the collection on Instagram. As reported Paper magazine, the "artist statement" read: "Sometimes life can be painfully ironic. Like the irony of dying violently in a place you considered to be a safe, controlled environment, like school. We are reminded all the time of life's fragility, shortness, and unpredictability yet we are also reminded of its infinite potential."

Regardless of your opinion on the sweatshirts themselves, which are not currently for sale on Bstroy's website, gun violence is a very serious issue. As of June, according to CNN, there have already been 22 recorded school shootings in the United States. And the year prior was the "deadliest" for school shootings in modern history in the United States, according to the BBC.

While Bstroy has yet to issue a statement or response regarding the backlash surrounding the controversial hoodies, it's clear many don't agree with the brand's vision.