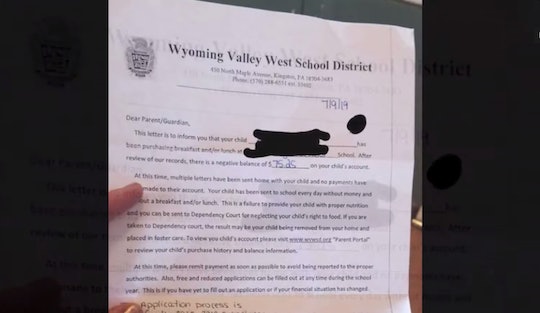 School lunch is something that's been a point of political debate for decades. From concerns about the type of foods served to whether school lunches should be free, there's a lot to discuss about this important issue. It can be difficult for both districts and families to navigate the situation, for sure, but one thing is clear — every child deserves to eat. However, a school that threatened foster care for kids' lunch debt refused donations — and it makes zero sense.

Earlier this month, a Pennsylvania school district — the Wyoming Valley West School District, to be exact — sent home a disturbing letter to parents of children who have outstanding balances on their lunch accounts. The letter reportedly threatened the possibility of their child winding up in foster care, according to WNEP.

“Your child has been sent to school every day without money and without breakfast and/or lunch. This is a failure to provide your child with proper nutrition and you can be sent to Dependency Court for neglecting your child’s right to food,” read the July 9 letter. "Please remit payment as soon as possible to avoid being reported to the proper authorities."

The letter continued: "The result may be your child being taken from your home and placed in foster care."

WNEP reported Wyoming Valley West is owed more than $20,000 by approximately 1,000 students — and four accounts owe over $450 each. The district's director of federal programs, Joseph Muth, explained the letter was a last resort, and that parents who received it had already been contacted a number of times by other letters, emails, and phone calls.

But here's the real kicker.

According to Newsweek, a local businessman — Todd Carmichael, who is the CEO and co-founder of La Colombe Coffee Roasters in Philadelphia — offered to pay off the entire amount. Except, the Wyoming Valley West School Districted declined. "Like almost everyone, I was horrified when I read that the Wyoming Valley West School Board sent letters threatening to put kids in foster care over unpaid lunch bills," he wrote in an opinion piece published in the Wilkes-Barre Citizen Voice.

Carmichael went on to explain that he received free school lunches as a child when his own mother "struggled to make ends meet." On Monday, he and his team reached out to the district to let them know they were willing to donate the full amount to cover the delinquent accounts. Specifically, they spoke with School Board President Joseph Mazur to "wipe the slate clean and restore dignity to the 1,000 families who received these threatening letters."

"Not only was Mr. Mazur callous and cruel in his refusal, but he also bucked his fiduciary responsibility to the school district that elected him to serve. Quite literally, he turned away funding," Carmichael wrote. He continued:

Mr. Mazur, I am offering to pay this debt in full. By saying no, you are not just shaming families who elected you, but you are placing this burden on WVW taxpayers, and that is completely unfair.

It's worth mentioning that beginning this fall, all Wyoming Valley West students will receive free meals because the school district now qualifies for the federal program, WNEP reported. However, parents will still be expected to pay the lunch money owed from their delinquent accounts.

Moving forward, though, the Wyoming Valley West School District will be sending out a different letter to parents of children whose lunch accounts are still delinquent — except without the threat of foster care, according to CBS Scranton affiliate WYOU. (Which is probably what they should have stuck to in the first place, if you ask me.)

Ugh. As a parent, I'm at a complete loss for words. The fact this school district refused a donation that would have erased the entire amount owed for school lunch debt is mind-boggling. Clearly, it was never really about the money in the first place.