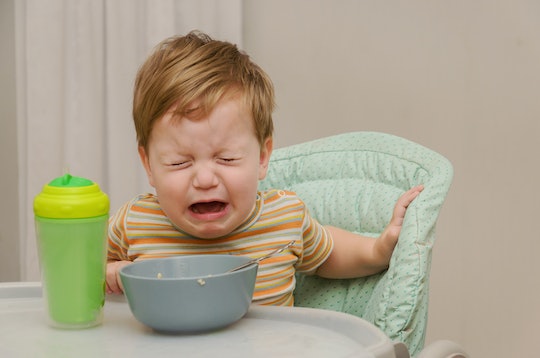 Science *Finally* Knows Why You Get Hangry

Picture this: It's a Monday evening. You're tired and hungry, and don't feel like cooking. So you decide to order a pizza. But that pizza is taking forever to be delivered, and at this point, you're so hungry that you decide to call 911 to complain. It's an off-the-wall reaction to a late delivery, but that's the thing about hunger-induced anger: It can get so intense that you'll do ridiculous things. But thanks to a team of researchers from North Carolina, science finally knows why you get hangry. Now you'll at least have an explanation for why that absence of pie in your mouth caused you to flip over your table.

A new study published this week in the journal, Emotion (*looks into the camera*), found that two key factors, context and self-awareness, play a role in whether being hungry will lead to anger, according to NPR. In particular, researchers from the University of North Carolina at Chapel Hill conducted two online experiments — one visual and one written — involving more than 400 people, and discovered that environmental factors and not being in tune with your own emotions can influence how angry a person who is hungry will become, NPR reported.

In one experience, the researchers showed participants images that were classified as positive, negative, or neutral (think adorable kitten, a rock, or a pissed-off dog), according to POPSUGAR. They were asked to rate both the image and report how hungry they felt when looking at it, and what researchers discovered is that the hungrier people felt, the more likely they were to rate a neutral picture as a negative one, POPSUGAR reported.

Lead researcher Jennifer MacCormack, a doctoral student studying psychology and neuroscience at the University of North Carolina at Chapel Hill, said of the findings, according to POPSUGAR:

In the second experiment, the researchers instructed one group of participants to fast for five hours or more, and the other group to eat a meal, before starting the test, NPR reported. Those two groups were asked to write an essay either about their emotions or about a neutral, unemotional day. Then, they had to go through a long and complex computer exercise involving colored circles, only to have "the blue screen of death" show up, MacCormack told NPR.

MacCormack added that the point of this particular experiment was to see if self-awareness "halts creating this hangry emotions and behaviors," according to NPR. What they found was that, while all the participants were a little upset over the experiment, only those hungry ones who didn't write about their emotions were pretty angry about it, NPR reported.

They thought the experimenter was more judgmental. They said they felt significantly more hate than other people.

So how can you control your hanger? MacCormack suggested that people become "a bit more aware" of their own feelings of hunger, according to POPSUGAR. She continued:

This means that it's important to take care of our bodies; to pay attention to those bodily signals and not discount them, because they matter not just for our long-term mental health, but also for the day-to-day quality of our psychological experiences, social relationships, and work performance.

By the way, that scenario I mentioned at the top of this piece? That actually happened recently. A 32-year-old Canadian woman and her 10-year-old son were so angry that their pizza order didn't come on time that they called the police to complain about the restaurant, according to The Toronto Star. I don't care how hangry you are, don't do that. Don't call 911 because you didn't get your pepperoni slice in 30 minutes or less.