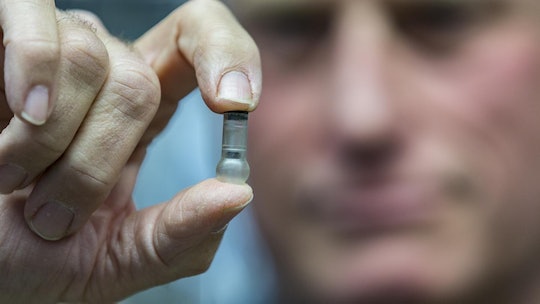 Science Is One Step Closer to Needle-Free Vaccines

If there's one thing kids love, it's needles, am I right? Yeah, not so much. And with the variety and number of vaccines that kids need in their first few years of life, regular check-ups are often fraught with the possibility of those dreaded needles — until now. Researchers at the University of California, Berkeley conducted a proof of concept study for needle-free vaccines — and the results so far are promising. While intranasal mist vaccines like FluMist are currently available, the "MucoJet" uses a capsule-sized oral vaccine delivery system that uses high pressure to shoot a stream of vaccine liquid into a patient's cheek, according to the study, published on EurekAlert!.

What makes the MucoJet system so revolutionary is that not only does it offer a painless alternative to traditional needle vaccine delivery, its efficacy has the potential to vastly improve upon existing needle-free vaccines like FluMist. In 2016, the Centers for Disease Control and Prevention actually issued a statement discouraging the use of FluMist vaccine, as it was not as effective as the flu vaccines administered via needle.

Here's how MucoJet works: Patients squeeze the capsule, breaking an interior barrier that allows the vaccine powder and water to mix, causing a chemical reaction inside the capsule. The capsule is then placed inside the mouth, with the nozzle end against the cheek. After about a 10-second delay, the chemical reaction generates enough pressure to force the liquid vaccine out of the tiny nozzle directly into the cheek. Bioengineer and MucoJet team member Kiana Aran says the sensation is similar to a water pick used by a dentist.

Results from the MucoJet study suggest that it could trigger an immune response "as good or better than delivery with a needle." However, there is still some concern that the delivery method known as "buccal immunization" is a good idea in theory, but not in practice. "Buccal immunization has not been very effective in human studies," Jiri Mestecky, a mucosal immunologist, told Science Magazine.

Now, before you go running to your doc asking for the new hotness in oral vaccines, you're going to have to wait... probably a few years, actually. The UC Berkeley proof of concept study was conducted on rabbits, not humans. A proof of concept is just that: Yes, it works — but the science is a long way off before consumers will ever see MucoJet in their doctor's office.

So, if you were envisioning a Dr. Beverly Crusher hypospray injection a la Star Trek like I was when I first heard the news, sadly, the technology just isn't there yet.

But hey, one step at a time – and MucoJet's proof of concept study is a bold and promising first step in changing the way people could be vaccinated.