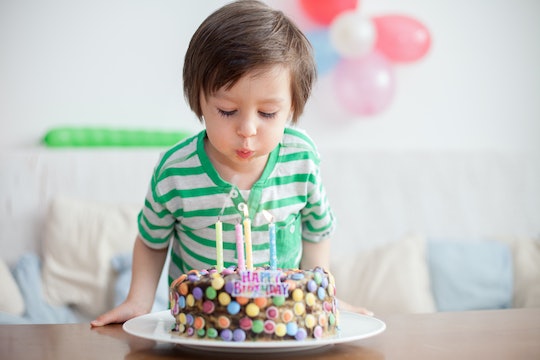 Growing up, I always ate ice cream cake on my birthdays. It didn't make sense, if you think about it, because I was born in late January. But the chill in the air didn't stop me from scarfing down vanilla and chocolate crunch goodness. So, in the interest of passing down this tradition, my partner and I bought our son an ice cream cake when he turned 2 in May. Birthday cake is one of those universally great things in life, right? It's sacred. Or it was, until science just ruined it forever. You read right: Science just ruined birthday cake forever.

According to The Atlantic, a study published last week in the Journal of Food Research found that, when you blow out candles on a birthday cake, you're transferring a LOT of bacteria. How much, exactly? Enough to increase the amount of bacteria found on frosting by 14 times. The results did vary, though; one test showed that bacteria skyrocketed by more than 120 times the original amount on icing, according to the findings.

Some people blow on the cake and they don’t transfer any bacteria. Whereas you have one or two people who really for whatever reason ... transfer a lot of bacteria.

How did the researchers arrive at these findings? According to the study, the team stuck candles into icing spread on foil placed atop of a Styrofoam base. They blew out the candles, dissolved the tested icing in sterile water, let the bacteria grow, and then counted the bacterial cells. The researchers did eat pizza before hand to simulate a real birthday party, Dawson said. (Because, seriously, what is a birthday shindig without pizza?)

All of that said, it's actually not as bad as it sounds. Dawson told The Atlantic that, in his opinion, the amount of bacteria is negligible, even though a lot was present. In particular, he said,

It’s not a big health concern in my perspective. In reality if you did this 100,000 times, then the chance of getting sick would probably be very minimal.

Think about it this way: According to the U.S. Department of Agriculture, party food is teeming with bacteria, some of which can cause food-borne illnesses. Not just birthday cakes, but buffet fare, chips, beverages — you name it. Avoiding bacteria will be hard, but can be mitigated if you practice safe food handling, like washing your hands and cooking food thoroughly.

As for birthday cake, Dawson said to go forth and eat a piece. Just not when someone's sick, obviously.