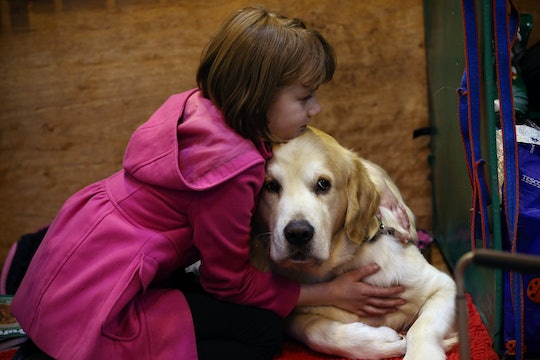 Science Says Dogs Hate Hugs, But You Should Hug Them Anyway

I’ve never come across a dog that I didn’t want to immediately hug. However, according to a recent review, that feeling is not mutual. Dr. Stanley Coren, a retired psychology professor from the University of British Columbia, suggests that hugging your dog can increase its stress levels. By now, you are feeling like a crappy dog owner for wanting to squeeze the stuffing out of your little cutie whenever you get home from a hard day at work. But never fear: Although this one expert says that dogs hate hugs, you can probably still keep hugging them anyway.

For his research, Coren looked at 250 random pictures of people hugging dogs on Google Images and Flickr. Using his experience as a dog behavior expert, Coren summarized what he saw in Psychology Today. “The results indicated that the Internet contains many pictures of happy people hugging what appear to be unhappy dogs,” he said. According to Coren, there are signs a dog is in distress, such as turning their head away, closing their eyes partially, lip licking, yawning or raising a paw (also, it would seem from this list, breathing, sneezing, and scratching its ear.) Coren found these sorts of distress signals in 81.6 percent of dogs in the pictures he reviewed and concluded, “You really shouldn’t hug a dog.”

The psychology professor blames biology for this particular doggy don’t. “Dogs are cursorial animals, which is a term that indicates that they are designed for swift running,” he says. “That implies that in times of stress or threat the first line of defense that a dog uses is not his teeth, but rather his ability to run away.” In other words, according to Coren, when you hug a dog, it can feel trapped and stressed out.

The research grabbed headlines across the internet: “Scientific Study Says Dogs Hate Hugs" was bound to catch a few curious glances. But there are some issues with the findings, and subsequent reporting. People were outraged someone suggested that dogs don’t like to be hugged and served up some anecdotal evidence to the contrary.

"Apparently we shouldn't hug our dogs as it causes them stress," one twitter user wrote, accompanying the post with a photo of herself with her dog, which was portraying none of the aforementioned stress signals. "Seemingly no one told my dog." Wrote another user, "My dogs actually wrap their 'arms' around my neck and cuddle. These scientist are clueless [sic]." Journalist John Dickerson even hilariously tweeted, "My dog is fine with hugs, he says it's the anthropomorphizing jokes he could do without."

It is notable that this wasn’t a “scientific study” in the traditional sense. It wasn’t peer-reviewed or published in a journal, the findings were presented in the above Psychology Today article. So no, “science” didn’t prove your dog dislikes your hugs. Coren himself told The Washington Post, “This is a set of casual observations.”

The data from the “study” was never released, so there is no way to back up his claims or understand his method. The Post reached out to several animal behavior researchers who all said they couldn’t agree or disagree with Coren’s findings because they had no sense of the kind of data collection he conducted.

But Evan Maclean, co-director of Duke's Canine Cognition Center, maintained that Coren's discovery was interesting. "This is interesting preliminary data which might serve as a good starting point for a formal study," he told the news outlet. In fact, he pointed out, a formal study could arguably confirm Coren's theory and our puppy cuddling days would be over.

But, for now, should we hug our dogs or not? According to Dr. Marc Bekoff, professor emeritus of ecology and evolutionary biology at the University of Colorado, Boulder, it’s fine to give your pooch a hug but there are caveats. “Just like people, some dogs love it, some sort of like it, and some may not like the close contact at all,” he wrote in a response posted on Psychology Today. (Phew! I was worried I was going to have to seek out human companionship for a second there.)

“My dogs love being hugged,” dog trainer Corey Cohen argued in an interview with The New York Times. Cohen suggested the dogs in the pictures Coren reviewed may have been anxious because they didn’t like having their picture taken or like being posed.

You should definitely consider some factors before going in for a canine hug-fest. It depends on how well a dog knows you, what the dog is currently doing, and whether or not the environment is chaotic. All of this seems like common sense to most adults. You shouldn’t really hug a strange dog (shouldn’t even pet one unless the owner says it’s ok) and you should never interrupt a dog while they're eating for a quick squeeze. Cohen thinks dogs can be comfortable, and even enjoy, a hug when there was a familiarity and trust between the dog and the human. Still, something to keep in mind is, according to Bekoff, "If you’re unsure, don’t hug the dog! Better safe than sorry.”

So how should you go about showering a pup with affection if it doesn’t like hugs? Coren suggests people try non-stressing ways to express their love for dogs. “It is clearly better from the dog’s point of view if you express your fondness for your pet with a pat, a kind word, and maybe a treat,” he said.

In general, “people should err on the side of caution,” dog trainer and behavior consultant Erica Lieberman told The Times. She says dogs can read human faces and may learn that hugs make people happy. This may lead to the dog putting up with hugs even though they really don’t like it, because they want you to be happy (awwww). Dog-lovers should watch out for “cutoff signals,” signs the dog is distressed. But, Liberman told The Times, “If you don’t see any of that, there are plenty of dogs who not only don’t mind [being hugged], but they get that it is what makes it a human’s companion.”

How To Hug A Dog

If you've gotten this far and still want to snuggle that puppy sitting next to you, there are a few ways to tell if your dog is a cuddler. Cohen says when he hugs his dogs, he can feel the dog relax its muscles, its breathing slows down, and its gaze softens. “I can definitely tell,” he said. “Their facial expression changes: ‘Oh, give me more!’” Hugging your dog, according to Coren, can help both you and your dog chill out and grow closer. “The truth is,” Cohen says, “if you have a decent relationship with your dog, it releases oxytocin.” (Oxytocin is a bonding chemical, the one that helps new mothers bond to their infants.)

Hugging your dog will not only help you feel better after a crappy day, it can strength your bond with your best friend. So screw this “science proves dogs hate hugs” talk, and give your puppy a big ol’ cuddle just for being lovable.

(By the way, you know what animal really hates hugs? My neighbor’s cat.)

More Like This
The President Of Ireland Wants To Get Rid Of Homework & Honestly, He's Onto Something
Guys, We Need To Talk About Pregnancy Farts
Jessie James Decker's Husband Is Worried A Vasectomy Will Take Away His "Power"
Keke Palmer Casually Drops Her Baby's Sex On Jimmy Fallon
What Parents Are Talking About — Delivered Straight To Your Inbox