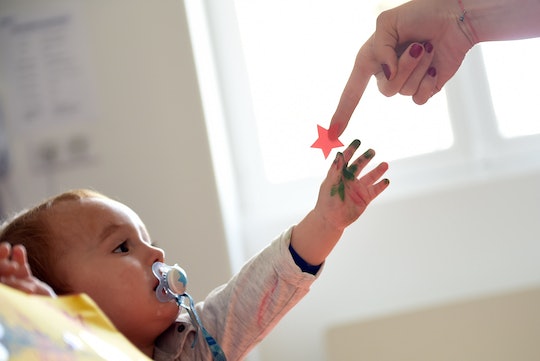 One of the hardest parts about being a parent is knowing when to lay on the tough love. When your child comes home bawling over the latest "owie," it's tempting to see their tantrums as an overreaction and, in turn, tell them to buck up. But it turns out, telling kids to get over it is not a good long-term parenting style.

Slate's Melinda Wenner Moyer decided to investigate how parents' reactions to their children's meltdowns affect children later in life. She found that while helicopter parenting is never the answer, not showing empathy towards your child when they are going through a tough time may scar them later on. According to her article, studies show that children with parents who comfort them emotionally are better socially adjusted.

For boys, tough love parenting can have serious consequences that stay with them well into adulthood. Male college students who said their moms punished them when they became too upset, reported more anger management issues than their peers who had supportive mothers, according to a 2015 study.

When we work with our children's meltdowns, we teach them how to regulate their emotions instead of suppressing them, where as when we tell our kids to toughen up, we teach them that their emotions don't matter. Not only is that damaging to their self worth, but it is counterproductive, as those kids may feel embarrassed and angry, and take longer to self soothe.

Tantrums are an opportunity for children to learn how to handle their feelings. Children are learning how to deal with the ups and downs of life. They are developing toolkits of coping mechanisms they'll use for the rest of their lives to calm themselves down. When you force them to get over things too fast, you cut that process short, and limit the tools they'll have at their disposal to cope with being fired from a job, or deal with a death in the family when they are older.

The next time your child has a meltdown, Moyer suggests you try this:

Don't rush over and fix the problem immediately, but also don't berate them for crying. Acknowledge their pain-- after all, falling from the swing set when you are four years old must be very scary indeed. Then suggest how they might fix their problem or make themselves feel better.

This teaches kids problem solving skills and emotional resilience. In other words, you're giving them the tools to "toughen up" all on their own.