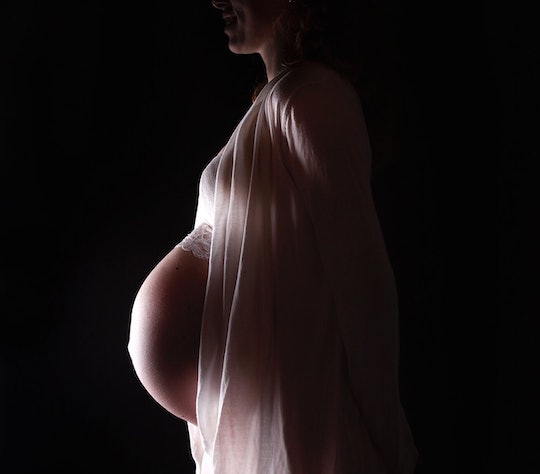 Science Says You Can Get Pregnant While Pregnant

For some couples, pregnancy presents an opportunity to have unprotected sex (if there's no risk of STDs, of course) because there's no need for birth control. It's not like a partner can get more pregnant — right? Well, what if I told you that wasn't exactly true? According to science, you can technically get pregnant while you're pregnant — like Pregception, according to New York Magazine.

Superfetation, as it's called, is extremely rare in humans (there are less than a dozen documented cases in medical literature) but it's not physically impossible. Superfetation in the natural world is actually not altogether uncommon; badgers, buffalo, hare, and cats experience it, according to research from the Leibniz Institute for Zoo and Wildlife Research in Berlin. Therefore, scientists have been able to study it, even if human cases are relatively rare.

Getting pregnant in the first place involves an orchestrated series of events, according to Planned Parenthood: an egg is released from the ovary, it meets a sperm and is fertilized, and then must implant itself into the womb so it can get nourishment and grow. Once the implantation has occurred, the hormonal changes of early pregnancy begin to occur — one of the primary tasks of which is to suppress ovulation. After ovulation occurs, the corpus luteum — the leftover tissue from after an egg is released — continues to secrete hormones that suppress ovulation until the cycle starts over again. If a pregnancy has occurred, the hormones of the placenta take over the role of secreting hormones that suppress ovulation for the duration of the pregnancy.

In order for superfetation to occur, there has to be a confluence of several extremely unlikely events: a moment where ovulation is not being suppressed by the placenta or corpus luteum, another egg being available for fertilization, and sperm making its way through the cervix to the egg, according to New York Magazine. Even if ovulation has occurred for some reason during pregnancy, getting sperm to the egg that's been released should be next to impossible: that's because during pregnancy, the mucus plug forms in the opening of the cervix, protecting the developing fetus from bacteria.

And even if all of those things happen in sequence, the fertilized egg still needs to be implanted in the uterus — which already has a fetus in it. As we know from multiple birth scenarios, it's not as though a uterus can't accommodate more than one fetus at a time — but not usually fetuses that have been implanted at different points in time and, therefore, have mismatched fetal development timelines.

So, pregnancy-within-a-pregnancy requires that a lot of rare occurrences happen — and all at the same time. And if all of these unlikely events occur, there's still the issue of different rates of fetal development. In the cases that have been observed, when the labor begins for the first fetus that was implanted, generally the second is delivered, too — and while the first baby may be born term, the second would obviously be behind in development by however many weeks elapsed between implantations, according to Scientific American.

In 2009, this happened to a woman in Arkansas named Julia Grovenberg: because the fetuses were only two weeks apart, both were born either at or near term, according to TIME. While it might seem easier to round-up and call babies born in this rare situation twins, that's not accurate: as Grovenberg learned after her children were born, despite the fact that they had the same birthday, they weren't truly the same age. As she told ABC News, the younger baby, a boy, was technically two weeks early, and continued to develop at a rate about two weeks behind his older sister.

While getting pregnant when you're already pregnant is extremely rare, it may be more likely to happen in couples undergoing fertility treatments, according to Scientific American. Since IVF involves procedures like getting the ovaries to produce a lot of eggs, and actually introducing multiple embryos into the uterus at one time (with the hope that at least one will implant successfully), it makes sense that those conditions could lend themselves to the rarity of superfetation.

Another woman named Kate Hill in Brisbane, Australia shared her story with Today Tonight in November of last year. Hill, who has Polycystic Ovary Syndrome (PCOS), had been struggling to get pregnant when she enlisted the help of fertility treatment. After she successfully got pregnant with her daughter, in the 10-day period that followed she and her partner had unprotected sex just once — but it was enough to conceive her second daughter. The babies were born at the same time, and are both perfectly healthy — and they'll have a really cool story to tell in their eventual high school sex ed class.