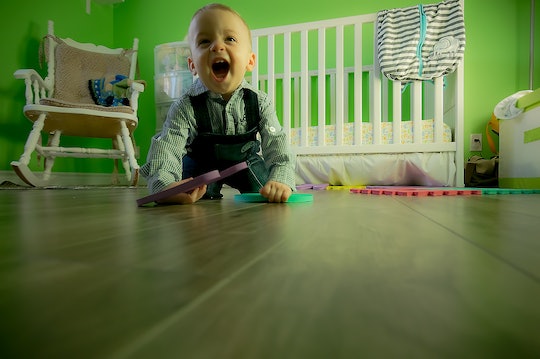 Here's Another Reason Why Millennials Are Broke

Millennials — Is there nothing we can do right these days? We've been branded everything from lazy and entitled to narcissistic and coddled. It's just friggin' awesome being a millennial, am I right? Here are some other realities: Our generation is also broke as hell, putting us at odds with the success many of our Baby Boomer parents experienced when they were the age we are now. There are many, many reasons why millennials experience financial hardships, but one study says millennials are broke because they're having kids out of wedlock. I mean, yes, I will concede that having children is more of an emotional windfall than a financial one, but still — this report has me raising some seriously dubious eyebrows.

Public policy think tank American Enterprise Institute released a new report in June about the millennial success sequence: It's literally the nursery rhyme you grew up with that goes "First comes love, then comes marriage..." But the report drills down into a few more specifics as indicators of success. One of the study's key findings is that millennials who obtain at least a high school degree, get a full-time job, and get married before they have children are "much more likely to flourish financially." I mean, sure that all makes sense — if we still lived in the era of Mad Men.

It's infuriating that the most diverse and progressive generation is being measured through the lenses of what defined success for our parents. Equally as infuriating is that there are still so many Baby Boomers informing policy that completely misses the boat on empowering millennials to make their way out of dire financial straits. As a millennial mom, having a baby may not have been cheap — hooray for IVF — but I can tell you from personal experience the student loan crisis is a far more likely culprit in the financial downfall of so many millennials.

The millennial generation was promised a very specific success sequence of going to college and finding a job, except that when we entered the workforce with tens of thousands in student loan debt, there were no jobs. The Great Recession was what sent hundreds of thousands of newly minted college grads to remain at home with their parents, because those jobs we were promised after four or more years of higher ed just weren't there.

The AEI report on millennial success tries to squarely pin the blame on having children, and more specifically, having children before marriage. Land-a-goshen, having children out of wedlock? The scandal of it all. I mean, let's get real here. According to a 2016 study, millennials are getting married later in life, and a whopping one-third of us — more than that, actually — will never get married. So, according to how the AEI defines success, the millennials who never get married should never have kids, otherwise it's back to eating Ramen noodles three meals a day.

If there's one thing that's been one of the most admirable traits about the millennial generation, it's our ability to adapt and redefine success as circumstances change. Millennials don't feel bound by the social constructs and institutions founded before them, from same-sex marriage and LGBTQ rights to the startup culture to the growing masses of the telecommute workforce.

Millennials are blazing ahead not at the expense of their Boomer generation parents, but in spite of them. It's unrealistic to continually try to cram the millennial generation into a mold of success from which we've already broken free — and continue to redefine and forge anew for ourselves.