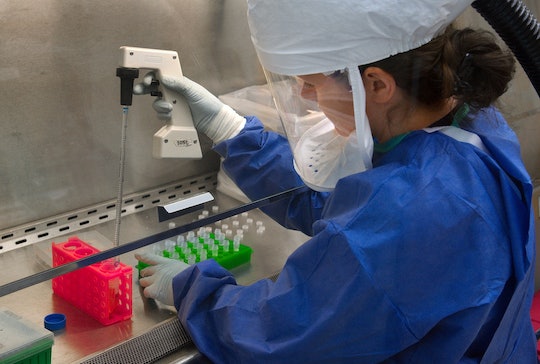 The Flu Shot Could Change In A Major Way

Yearly vaccinations help prevent the flu, but not everyone makes sure to get their shot each fall. Developing scientific advances, though, could make the need for frequent flu shots a thing of the past. Currently, scientists are working towards a universal flu vaccine, in efforts to increase the number of Americans vaccinated against the flu from its current 2 out of 5 rate to one much that's more substantial and, consequently, more effective.

A universal vaccine "could change the entire way we prevent influenza," notes William Shaffner, a professor of medicine at Vanderbilt University and the medical director of the National Foundation for Infectious Diseases. "If we had an effective universal vaccine, it would take a huge dent out of healthcare costs [and] disruption of work, school attendance, and social activities," he stresses.

Barney Graham, deputy director of the vaccine research center at the National Institute of Allergy and Infectious Diseases, explains how the vaccine could come to be. A possible breakthrough has been made possible by advances in molecular technology that have emerged only in the last few years. Now, scientists are able "to design things at atomic resolution," Graham shares, which might make all the difference.

A few different approaches to universal vaccines are underway. In one case, the vaccine would work to target the virus' "stalk" rather than its "head," seeing as the head is the part which changes each year and thus requires the creation of new vaccines each season. A second aspirational vaccine would use "recombinant DNA techniques" so that, ultimately, "our immune system[s] will remember the conserved regions . . . so that changes in the head won’t matter," shares Peter Palese, chair of the microbiology department at the Icahn School of Medicine at Mount Sinai in New York. Lastly, though not a lifelong vaccine, a different group of scientists are working on a vaccine that could last anywhere from 5 years to a decade— one that takes into account a long history of previously developed vaccines.

Currently, the CDC broadcasts flu shot advisory warnings, noting that "annual influenza vaccination is the primary means of preventing influenza and its complications." The development of a universal flu vaccine, though, could change that. "Some very impressive scientific efforts are underway to make this real," Schaffner believes, assuring that a this isn't merely a pipe dream. With our current flu season underway, and past estimates of 200,000 hospitalized flu cases resulting in about 36,000 deaths per year, advancements of this nature truly have the potential to drastically change the influence of the flu virus, hopefully decreasing its prominence, making us all much healthier.