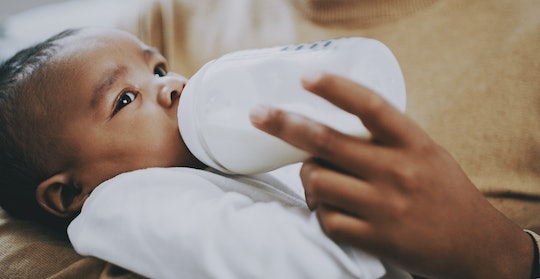 What if providing breast milk for your child was as easy as reaching into the cupboard or fridge? Thanks to the work of two female scientists, it soon could be. Scientists Michelle Egger and Leila Strickland announced this month that they grew breast milk's predominant components in a lab, potentially putting us closer to the day when any parent can provide breast milk for their child.

"For us, breastfeeding is a beautiful process for many mothers that we want to encourage and celebrate, while providing a supplemental feeding tool that can help all families reach their nutrition and feeding goals ... [even if] infant formula is their only other option," Egger tells Romper. "We don't look to replace breast milk, but rather assist the 84% of babies that are being fed formula in the [first] six months of life in reaching better health outcomes through our product!"

While Egger and Strickland, the co-founders of Biomilq, aren't looking to replace breast milk, they have been intent on creating a nutritionally-similar product. "We aspire to produce a cultured, human-milk product that offers families a new option for feeding babies — one that's nutritionally equivalent to breast milk and cultivated under safe conditions using our first-of-its-kind technology," the pair recently wrote on Medium.

And it seems they may be one giant step closer to achieving that goal. Egger and Strickland announced earlier this month that samples from their proof-of-concept experiments contained the predominant protein and sugar components found in breast milk.

In fact, the U.S. Centers for Disease Control and Prevention (CDC) has reported that, "although most infants receive some breast milk, most are not exclusively breastfeeding or continuing to breastfeed as long as recommended." According to data from the CDC, only 57.3% of infants in the United States are breastfed up till 6 months old. That number drops to 36.2% when looking at the number of infants given breast milk up till 1 year.

While Egger and Strickland's breakthrough is exactly that, a breakthrough, they're not ready to call their lab-grown breast milk components, well, breast milk. "We're not calling it breast milk just yet," Egger told The Spoon, adding that breast milk contains many more components than the two they grew via from mammary cells in a bioreactor. Still, Egger told The Spoon she and Strickland were confident their lab-produced samples were "quite similar to milk." The pair plan to submit their samples to a detailed molecular characterization to establish whether or not they have the same nutritional profile as breast milk, The Spoon reported.

Although lab-created breast milk isn't likely to ever be exactly the same as human breast milk, which contains antibodies and other immunologic substances, Strickland told Fast Company she still believes it will be "vastly nutritionally superior to infant formula." Additionally, Strickland argued that lab-grown breast milk could offer some parents a method of feeding more realistic than traditional breastfeeding.

"Whether it’s low milk production, incompatible workplaces, or the ongoing stigma around breastfeeding in public, families feed infant formula out of necessity rather than preference," Egger and Strickland wrote on Medium. "Parents and caregivers are left with suboptimal choices, and they want an option that doesn’t force a trade-off between babies’ nutrition and mothers’ well-being."