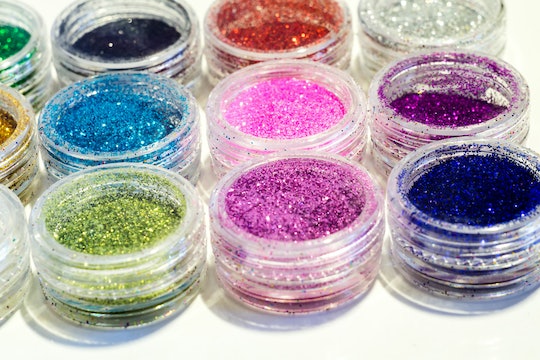 Scientists Want A Ban On Glitter & Oh Hell To The No

Once upon a time, glitter was something you only used on Christmas ornaments and the occasional very special school project. Now, literally everything comes in a glitzy version, from slime to shampoo to (believe it or not) bagels. If you're a sucker for the sparkly stuff, it's a great time to be alive. Except maybe not, because now some scientists are calling for a ban on glitter. Sheesh, can't we have any fun in life?

Glitter might seem harmless enough, but the festive little flecks are actually bad for us — and the planet, too. Chances are you've never given much thought to what glitter is actually made out of, unless you found yourself so bored during arts and crafts with your toddler that you literally sat there and contemplated the origins of the stuff (been there). Unfortunately, it's not fairy dust at all: Turns out most glitter is a combination of aluminum and a plastic called PET, which, according to researchers such as environmental anthropologist Dr. Trisia Farrelly, can break down to release hormone-disrupting chemicals. And that's not all: Glitter is also a microplastic (plastic less than 5 millimeters in length), which poses a significant threat to marine life. In fact, there are an estimated 51 trillion microplastic fragments in the ocean right now. (I'm no expert, but that sounds like way too much, probably.)

Still. A ban on glitter?! I can barely bring myself to contemplate an existence so dull. Imagine not having the option of a nail polish that turns your toes into mini disco balls or highlighter that makes your cheekbones shine like the rings of some distant planet. Imagine the horror of the holiday season without a shimmery sheen over your entire household. How boring would making Valentines for 30 first graders be without a shaker of magical red glitter at your disposal? A stroll through the aisles at the craft store (or Sephora) would feel somber at best. Without glitter, what's left? Construction paper and paste? We're not living in an episode of Little House on the Prairie, for crying out loud.

Look, it's not like I don't understand the backlash to our society's current glitter obsession. Yeah, the health and environmental concerns are scary, but also, glitter can be as annoying as it is fabulous. You know this if you've ever attempted to clean up an entire jar off the floor (spoiler alert: you can't, don't bother, just learn to live with it) or if the backseat of your car has been accidentally bedazzled ever since your kid sat on it wearing her fairy/ballerina/princess Halloween costume, or even just her day-to-day clothes. If removing all traces of glitter from our homes is so impossible, it's no wonder the oceans are overrun with the toxic twinkle.

And I will agree that there are some things that just don't need the added sparkle. The aforementioned bagels come to mind, of course, as do other mostly functional items like hand sanitizer or, somewhat horrifyingly, lube (yup, it's a thing). I'm against glitter being inserted in any orifice, as a rule, and, maybe it's just me, but I don't really see the need for glitter in my laundry detergent — especially since if there's even the tiniest trace of glitter anywhere in your home, said trace will end up on everything and everywhere.

All of those gripes aside, however, I still can't bring myself to get on board with a total glitter ban. The world can be an ugly place, and glitter is... well, it's pretty. It's pretty, relatively cheap, has zero calories, legal, makes people happy — let's face it, how many things fall into all of those categories? I say we cut back on the really crazy glitter stuff (the bagels and the lube) and aim to keep the sparkle alive in moderation. You know what they say: All that glitters is not gold... probably because it's plastic and aluminum.