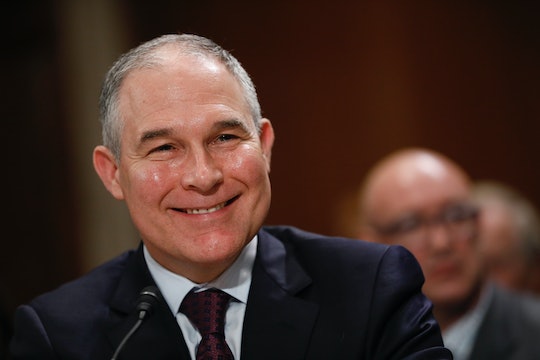 On Friday, the Senate confirmed Scott Pruitt to head the Environmental Protection Agency. This might seem like a joke, since while he was Oklahoma attorney general, he sued the same agency several times to try to curb environmental activism under the Obama Administration, and as he has vowed to diminish the EPA's regulatory scope once he's in office. But it's no laughing matter. And Scott Pruitt's quotes on climate change show why it doesn't make sense that he was chosen for a directorial role in the EPA.

The Senate approved Pruitt by a 52-46 vote Friday afternoon, and the vote was notably not strictly according to party lines. Two Democrats — Joe Manchin of West Virginia and Heidi Heitkamp of North Dakota — voted for his nomination, but Republican Susan Collins of Maine voted against it.

An investigation by The New York Times found that Mr. Pruitt, along with other Republican attorneys general, and some of the nation’s top energy producers have coordinated in the past to push back against environmental regulations during the Obama presidency. This makes Pruitt's new role as the head of an agency that deals with environmental protections seem ill-fitting at best, and could be a huge conflict of interest for the Oklahoma Republican.

But it's Pruitt's quotes on climate change that are worrying to environmental activists, and make it seem like a job overseeing an environmental protection division is maybe not the best fit for him.

As the NRDC, or the Natural Resources Defense Council, noted in the above tweet, "Scott Pruitt, Trump's EPA pick, actually called #climatechange a 'religious belief.'" The NRDC linked to a piece on Think Progress describing this quote. Pruitt reportedly said during an April 2016 appearance on the the Oklahoma-based radio show Exploring Energy:

I appeared before the U.S. Senate Committee, last year I believe it was, sometime earlier in the year, about the Clean Power Plan challenge that we were part of leading. And this Senator from Rhode Island during the midst of the testimony was just — it is just a religious belief for him and for others.

In a piece on climate change for the National Review, Pruitt once co-wrote with Luther Strange, he wrote:

That debate is far from settled. Scientists continue to disagree about the degree and extent of global warming and its connection to the actions of mankind.

Except that, according to a piece on NASA's government website, "97 percent or more of actively publishing climate scientists agree: Climate-warming trends over the past century are extremely likely due to human activities."

And according to the Financial Times, Pruitt once accused the White House of having an “anti-fossil fuel mentality.” Which doesn't suggest he's a big fan of considering the role of the use of fossil fuels in climate change.

Environmental activists and organizations are especially alarmed by Pruitt's confirmation to the EPA position. In a piece on The Guardian, Michael Brune, executive director of the Sierra Club, said of Pruitt back in December:

Having Scott Pruitt in charge of the US Environmental Protection Agency is like putting an arsonist in charge of fighting fires. He is a climate science denier who, as attorney general for the state of Oklahoma, regularly conspired with the fossil fuel industry to attack EPA regulations. Nothing less than our children’s health is at stake.

The vote came after the Democrats in the Senate failed to delay the confirmation proceedings until after a new collection of documents from Pruitt's state office are made public under a court order. Those emails should be released beginning next week. It will be interesting to see what they say, and whether they include more quotes from Pruitt in regards to his thoughts on climate change.

More Like This
13 Rosh Hashanah Quotes For A Sweet New Year
Exclusive: Your Favorite Yeti Is Back With More Adventures In New 'Abominable' Series
The Complicated Targaryen Family Tree From House of the Dragon Explained
Firefly Lane Is Coming Back To Netflix For One More Final Season