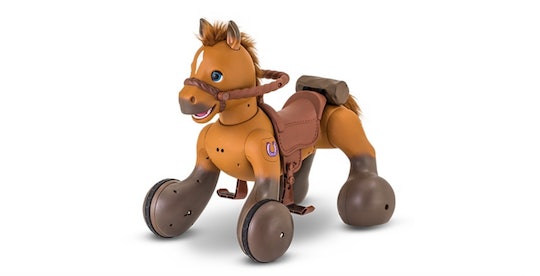 My daughter's 4th birthday is quickly approaching and I'm not going to lie, I've got some serious mom guilt about it. We'll be on an insanely long flight on the day of her actual birthday, so that big party she's hoping for — it ain't gonna happen. To make up for it, I know I'm going to have make a grand gesture. Now, I'm not going to go out and buy her a real pony or anything... but I am eying Scout, the interactive ride-on pony. This super cool toy is pretty much every kid's dream, and I know I'd win some major mom points by surprising her with it for her birthday.

I don't usually go for over-the-top gifts, but I have to admit, this is one outrageous toy that seems worth the space it would take up in our house. Rideamal Scout, as this lovable pony is known, retails for $398 (at Walmart), but it has some serious bells and whistles to keep kids engaged. So, allow me to gush about this pony for a second, and trust me, you'll want to keep reading because there's a real fun surprise at the end! Hint: a free pony may be in your future.

Scout is the newest addition from Kid Trax, the maker of those tricked out toddler ride-ons you've probably seen in the aisles of Walmart or on Amazon. Scout is battery-powered and has fully motorized eyes, ears, head, and wheels. It even makes munching sounds when you feed it the play carrots and apples that come with it. Plus its ears move when you brush its mane. Yep, a grooming brush is included too.

Your kiddo can take Scout for walks, with Scout happily trotting along behind, or go for a joy ride, since Scout cruises up to four miles an hour. What's more, the pony comes programmed with 100 unique sounds and movements, including a special dance, so your kiddo can really move and groove with their lifelike pony pal, who really does seem, well, lifelike. One look at those blinking eyes and you'll be convinced.

Basically, Scout is the kind of toy that makes all other toys look obsolete. I mean, how can those classic little cars compete, when there's a rideable pony in the mix? Can you just imagine the look on your kid's face when he or she first realizes that this sweet pony is all theirs? Pure bliss.

So here's where the good news comes in. Now you can enter for a chance to win one of two Scout ride-on ponies. Romper has partnered with Kid Trax Toys to give away free rideable ponies, people, and you don't want to miss your chance to win one for your little cowgirl or cowboy!

To enter the sweepstakes, click here to sign up to win one of two Scout ride-on ponies and to view the complete list of contest rules. The contest kicks off on Sept. 18 and ends on Oct. 11, when the two lucky winners will be notified via email.