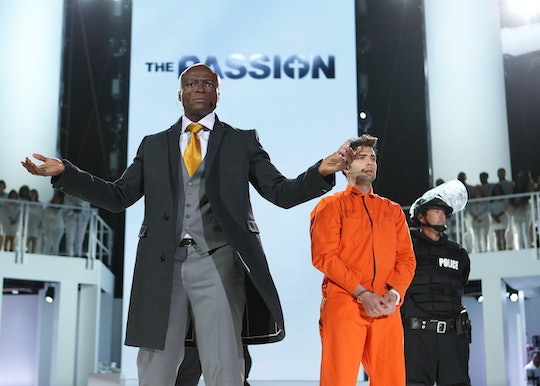 Seal’s 'Mad World' Performance In 'The Passion' Was Pretty Chilling

Fox aired The Passion, its live musical version of Jesus Christ's last days alive, on Sunday, and it was met with mixed reactions on the Internet. But, one thing that most people agreed on was the song choices and the performers who were chosen to sing those songs. Seal's "Mad World" performance during The Passion was chilling and unexpected, but it was a great choice for the story that the musical was trying to tell.

Surprisingly, NPR reported Sunday that The Passion was actually Seal's first acting gig. Singer-songwriter Seal played Pontius Pilate, the man who orders Jesus' death, according to the Biblical story. During The Passion, he sang "We Don't Need Another Hero," by Tina Turner, and "Mad World," by Tears for Fears, according to NPR.

It was the songs that actually drew me to take on the part, because I love that song 'Mad World.' And so they kind of lulled me into a false sense of security by saying, 'Oh, you'll sing this song. By the way, there's a little bit of acting involved, too.'

Seal sang the song after speaking with Jesus about why he couldn't free Jesus even though people were asking him too. As Jesus is being marched away by police officers, Seal sang "Mad World," and the Internet felt it (even the non-religious part of the Internet).

In his interview with NPR, Seal's take on religion and the musical was actually pretty damn inspiring. He didn't endorse any one religion, but he also didn't write off having a belief system. It was really fascinating, especially since the idea of airing a Christian-based performance on primetime TV (when much of the country doesn't identify as Christian) is definitely controversial. Seal's comments recognized that and engaged with it:

I went to what they call a Church of England school, primary school, when I was very young. And, you know, I came from a sort of typical English family where, you know, my parents did their best to kind of instill the values of religion into us as kids. But they weren't overtly religious and I didn't grow up staunch Catholic or anything like that. But you know, I believe in God, I believe that there is a God. I don't necessarily think he's a grey-haired man with a beard, but I think of God as more of an energy, a divine energy.

His refreshing take on personal faith (because many people forget that that's exactly what faith is: personal) shows just why he was the perfect choice for a musical like The Passion. And he killed his performances, too, of course.