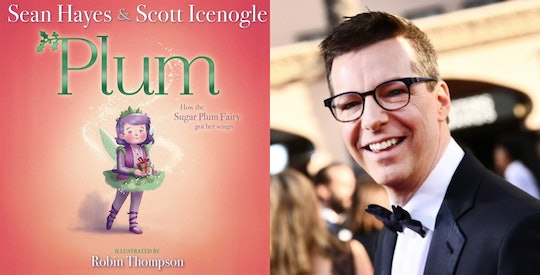 Have you ever been curious about how the Tooth Fairy became the Tooth Fairy? Or how Flora, Fauna, and Merryweather became the Fairy Godmothers? Origin stories for some of our favorite fairy tales are few and far between, but there's one character you'll no longer have to wonder about. That's because Sean Hayes' new children’s book Plum tells the secret story of the Sugar Plum Fairy, and it's sure to make your heart sparkle — just in time for the holidays.

But who is the Sugar Plum Fairy? And how did she get those wings of hers? Plum, which Hayes created with his husband, composer Scott Icenogle, attempts to answer those questions using humor, charm, and a bit of sass, according to NewNowNext.

But how did the Will & Grace star come to write about the Sugar Plum Fairy and the secret history of her wings? Hayes told Good Morning America in an appearance on Monday:

Plum is a book that [my husband] Scotty and I wrote. It’s how the Sugar Plum Fairy got her wings. What we have in common is a creativeness, a love for music… I was obsessed with The Nutcracker and found out he was, too. And so we were like ’This is an insane story… so where do these characters come from? Let’s do an origins story!'

And it's one fun origin story, indeed. Just read some of the synopsis of Hayes' debut children's book, which published last month on Simon & Schuster:

Plum’s pure heart grants her an unexpected reward. When she eats a cake left behind by a mysterious magician, she is transported into the Land of Sweets. But Christmas here is threatened, too—by a sourness that is spreading from the center of the land. Plum’s determined to help, and in doing so, she might just find the family she’s always dreamed of, thanks to a good heart—and Christmas magic!

I think it's safe to say that Plum, which was illustrated by Robin Thompson, may make you laugh while also melting your heart.

Currently, Hayes and Icenogle are criss-crossing the United States on a book tour for Plum. And the actor brought his work back home with him: On Thursday, the couple visited Hayes' hometown of Glen Ellyn, Illinois to read their The Nutcracker-inspired children's book to about 1,200 elementary school students, according to The Daily Herald.

Talking about his book and the tour stop, Hayes told The Daily Herald, "This is the reason we did it. It's right here, right before us. We're so excited to talk to the kids and hear their reaction. It's the whole reason we did it."

It's safe to say Hayes and Icenogle know what it means to get into the holiday spirit.