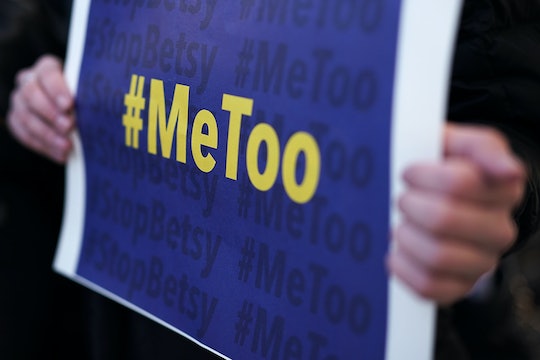 After actress Alyssa Milano shared her experiences regarding sexual harassment and assault under Tarana Burke's #MeToo, the internet began to explode. The hashtag has not gone away over recent months, prompting researchers to wonder what its full implications might be. According to a new study, searches about sexual harassment and assault increased after #MeToo. Now, it's clear that this hashtag has done more than prompt conversation about sexual assault in the United States.

Tarana Burke originally started "Me Too" in 2006, designed to help women who survived sexual violence, as reported by the Chicago Tribune. The phrase gained immense traction across social media after Alyssa Milano tweeted encouraging people to respond to her tweet with "me too" if they had been sexually harassed or assaulted.

#MeToo was tweeted 300,000 times the day after Milano's tweet, according to a study published in JAMA Internal Medicine, and, as conversations continued, more people began to discuss sexual assault outside of just Hollywood. #MeToo helped people who hadn't been able to tell their story open up, as noted by the study's abstract, but researchers wanted to know more about how the conversations affected those whose perpetrators weren't famous or well-known.

To find out, researchers decided to examine how internet searches for sexual harassment and sexual assault changed following #MeToo, as noted by the study's abstract. And their findings help confirm what a lot of people already knew.

In the months following #MeToo's resurgence, there has been an increase of people searching for information on topics relating to it, as Reuters reported. According to the study's abstract, searches related to sexual harassment and/or assault increased 86 percent over predicted numbers from Oct. 15, 2017 to June 15, 2018 — a huge jump.

Senior researcher John Ayers said, according to Medical Xpress, "Our study reveals that even months after the beginning of #MeToo, millions more than otherwise expected are seeking out help for sexual violence online. Revealing this record-setting and sustained engagement is a call to action for the nation."

These numbers help confirm that #MeToo has made difference in raising awareness and prompting people to begin taking action. This confirmation also means that officials need to begin taking #MeToo seriously.

"#MeToo is not the first movement to empower victims of sexual violence, but what is unique compared to past movements is #MeToo's staying power," Ayers said, according to Medical XPress, adding:

Eight months since the initiation of #MeToo, millions more than expected are seeking out help for sexual violence online. #MeToo's sustainability, and our study alerting leaders to this, could yield major wins for the nation's public health.

It's important to recognize that, for the purposes of this study, the researchers considered the beginning of #MeToo to have been Milano's tweet encouraging those who've been assaulted or harassed to respond "me too," which she tweeted on Oct. 15, 2017, according to the study's abstract, not Burke's original conception of the movement in 2006.

Other factors, such as race and sexuality, impact rates of sexual assault, as well. As noted by the Institute for Women's Policy Research, black women are impacted by sexual violence at higher rates than women generally.

#MeToo's founder Tarana Burke expressed some concerns around how the phrase has been engaged throughout the past year for Variety, writing:

It is also necessary for us to expand the scope of the movement in the mainstream. In 2006, I launched the #MeToo movement because I wanted to find ways to bring healing into the lives of black women and girls. But those same women and girls, along with other people of color, queer people, and disabled people, have not felt seen this year.

Moving forward into 2019, it's fundamental to recognize the words of the woman who laid the groundwork for #MeToo to exist. As this study proves, #MeToo has incredible staying power. But, that means little to nothing if it leaves some people's stories behind.