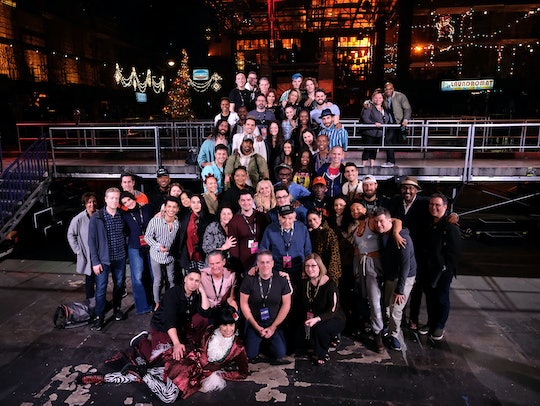 Twitter Needed All The Tissues During "Seasons Of Love" On 'Rent: Live'

Sunday evening's production of Rent: Live on Fox meant a lot of strong reactions from fans who just love the original show. When Fox announced that the show would need to be mostly... not live, based on the cast's Saturday dress rehearsal, due to actor Brennin Hunt's ankle injury, some fans got upset that the show wasn't live. From then on, different songs and scenes resulted in mixed reactions, but "Seasons of Love" on Rent: Live is making everyone on Twitter cry, so it seems that at least some parts of the show are still a hit, even if fans have mixed opinions about other choices that were made for this particular production. You can't please everyone.

Expectations were high for many of the musical's most loved songs, and, of course, as with anything that's beloved, there were sure to be some who were disappointed. But when it came to "Seasons of Love," it seemed as though the song was a pretty big hit with fans, many of whom took to social media to share their feelings and impressions of one of the show's biggest musical numbers. Many thought that the performance was spot-on from start to finish, particularly actress Keala Settle's big-time solo.

The Greatest Showman star wowed Rent: Live viewers with her solo, garnering particular praise after hitting the song's famous high note. People reported that this is Settle's second performance since she experienced a "mini-stroke" that led to her diagnosis of Moyamoya disease. Settle performed at the 2018 Academy Awards only a few days after her stroke (the Oscar-nominated "This Is Me"). Settle had to relearn how to do many things after she had surgery to help address her condition, including walk, talk, and sing, per TODAY.

The song was beautiful — Settle's solo made it even better — and it's clear that many viewers agreed. It, too was part of the previously-recorded version of the show that Fox had to show, however, but that didn't damper the effect of the iconic song.

As if the earlier version wasn't tear-jerking enough, Fox brought the original cast of the Broadway show out to sing "Seasons of Love" at the very end of the production. And Twitter loved that version — again featuring that epic high note by Settle — perhaps even more than the earlier version.

Settle's microphone appeared to malfunction during that final number, but it didn't matter, she hit that high note anyway, to fans' delight.

The song tends to pull at heartstrings because of what it — like the show in general — is all about. And the cast and crew of Rent: Live seemed to recognize how important that message still is in 2019.

"Jonathan [Larson] wrote about how he was living through a time of adversity and how the only way to overcome it was to unify, to address it together," the show's executive producer Marc Platt, told Billboard. "That's a battle cry for today. That's the spirit of Rent."

The show wasn't necessarily a hit for everyone (but, really, what is?), but many fans seemed to think that when it came to "Seasons of Love," the casts — old and new — hit it out of the park.