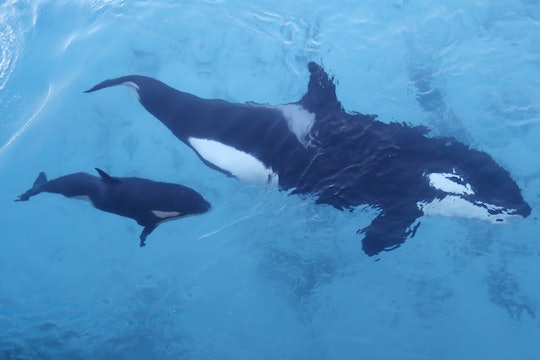 SeaWorld Will No Longer Breed Orcas, But It's Only A Small Step Forward

SeaWorld has once again taken a couple of tiny steps forward, thanks to public outcry galvanized by the 2013 documentary Blackfish. In an op-ed for the Los Angeles Times, SeaWorld president and CEO Joel Manby announced that SeaWorld will no longer breed orcas and will begin a partnership with the Humane Society. That's nice and all, but what about dolphins and beluga whales? Are they more deserving of forced insemination because they've never starred in a certain movie about a foster kid featuring my favorite SWV song? It's very clear that SeaWorld's decision is just a small step forward in a larger move to stop treating animals as a form of entertainment. SeaWorld did not immediately respond to Romper's request for comment.

The op-ed opens with a detailed history of SeaWorld's relationship with orcas. Manby said that, when the park opened in 1964, orcas were "feared, hated and even hunted," and it was through SeaWorld that the public fell in love with them. It feels part hipster ("We liked orcas before they were cool") and part controlling boyfriend ("You're nothing without me, orcas!"). Manby also said that SeaWorld is "phasing out our theatrical orca whale shows," while the company's blog states that the shows will be replaced with "new, inspiring, natural orca encounters," and an artist's conception on the site shows some happy orcas frolicking in an oversized kiddie pool with a mountain-scene backdrop. It reminds me of the films one can attach to the back of a fish tank to trick them into thinking they're in the ocean.

Manby said that the current crop of orcas in SeaWorld's custody will be the last, since the park no longer captures them in the wild. But he also mentioned a renewed commitment to rescue operations, so it's unclear whether "rescue operations" means the park will continue to bring orcas in from the wild as long as it's a rescue.

Here's the thing: if SeaWorld is truly concerned about the welfare of marine mammals, can't they should make legitimate rescues their only method of acquiring animals. Captive breeding is just as bad for dolphins as it is for orcas, and it doesn't seem to be going well for belugas, either.

If parents want their kids to learn about these great animals, there's the Internet. If that doesn't get them "involved" enough in the wildness, some companies offer boating opportunities off the West Coast to see different whale species migrating. And that is the real way to experience a wild animal — in the wild, where you can observe from afar and admire them in their natural state.