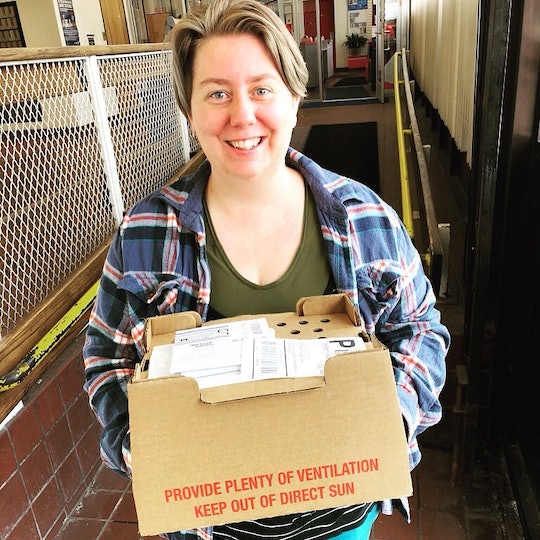 I Couldn't Afford A Second Baby, & This Is What I Spent My Money On Instead

The first time I floated (get it) the idea, my partner raised their eyebrows with skepticism. I'd been angling for baby number two off and on for a while, always with the caveat that we could (hypothetically) have a second child in the (hypothetical) distant future when we would be (hypothetically) more financially secure and more capable than our current selves. Like many American families, we weren't sure we could afford a second child.

More Like This
30 Vintage Photos Of Parents Giving Their Babies A Bottle
Here's The Deal With Babies Who Sleep With Their Eyes Half Open
18 Best Sand Toys In 2021 For Babies, Toddlers, & Kids
What You Need To Know About Sunscreen For Your Baby

Families pay an average of $9,589 on daycare per year, according to a 2016 report by New America. Forty-four percent of men and women polled by Morning Consult said that they couldn't afford more children, reported the New York Times in piece on the reasons women are having fewer babies (hint: it's not because they want smaller families). In 2017, the birth rate fell to a historic low in the U.S., per data from the National Center for Health Statistics.

It was becoming increasingly clear that that a future in which it rained Benjamins wasn't coming — or at least not fast enough. Things were further complicated once both my partner and I came out as trans, not because trans people can't have kids but because there was just a lot going on, transition-wise. Still, I couldn't let go of the idea of a brand new little one to take care of.

Somewhere amid deliberations, I had a new idea: adding two little ones to our family.

"I don't know..." my partner was understandably skeptical, "why ducks?" Luckily I was ready with a list of reasons, because when I get an idea in my head I do research. Ducks will eventually lay eggs, which we can eat. Raising ducklings would be a good experience for our toddler! Ducks eat bugs! And ducks are approximately a thousand times cuter than chickens, in my scientific estimation. Not only that, but they also walk funny, and have hilarious faces. But the most compelling reason was the one underlying all the others, it would be cheaper and easier than having a baby.

A human baby would need to be gestated for 40 weeks by somebody (probably me, ugh), whereas ducklings could be shipped priority mail from a hatchery. A baby would need expensive gear, like a new car seat and crib, whereas I could build a duck house from old pallets and scrap wood. A baby would need to be either nursed or formula fed until they were big enough to overwhelm our tight grocery budget. Ducks, on the other hand, could live off of chicken feed and kitchen scraps. A baby would be an infant for approximately one year, and after that would enter the equally challenging toddler stage, whereas ducklings could move to the backyard at six weeks and would be nearly full size by ten. The math was definitely working out for team duck. I made a compelling case, and eventually my spouse got on board. Maybe my excitement was infectious, maybe they were just relieved I wasn't talking about babies.

As we reviewed duck breeds online together, we shared one hope that we never exactly named. Maybe this project would be enough to distract me from my secret hope for a larger family.

Mary passed away mysteriously in the night. Suddenly we had one-week-old bird, who was incredibly heartbroken, living in a plastic bin in our living room.

This wasn't the first time I chose caring for animals to satisfy my need to nurture. We already have three cats, and the case can be made that I adopted at least two of them because I wanted a baby but couldn't have one just yet. Me and our eldest cat (which is how we refer to him, as one does) have the kind of tight knit bond that can only be formed by focusing all of your emotional energy onto another creature. But even after years of caring for needy felines, I wasn’t prepared for the intensity our duckling adventures would bring into our lives. It turned out to be even more like having an infant in the house than I could have expected.

Ducks are flock animals, and have incredibly high social needs, which is why we never considered getting just one duck. We ordered two ducklings from a reputable hatchery in California, and I picked them up from the post office. We named them Mary and Martha, and I was immediately both smitten and overwhelmed by how much they pooped (I mean, wow).

However, a week after our adorably little fluff balls arrived, Mary passed away mysteriously in the night. Suddenly we had one-week-old bird, who was incredibly heartbroken, living in a plastic bin in our living room.

Martha alone was a whole different ballgame. Before, the little container the ducklings lived in (usually called a “brooder box” or just “brooder”) had to be cleaned regularly, their food and water had to be changed and refilled nearly constantly, and they needed us to spend time with them. But a single duck is not a happy duck, and they require near constant socialization just to keep it together. The soonest we could get more ducklings was two weeks away, so on the advice of the internet we got our sad duckling a mirror to look in, and a stuffed puppy to cuddle with. But she still cried. She cried all the time. She cried literally any time she was alone in our living room for a second, even when I was just running to the bathroom. I slept next to her brooder on the couch, and woke up to her calling me because she had tipped her water over again.

We held her as much as we possibly could, but that meant cleaning up a lot of increasingly gross poop. In an attempt to keep the mess down, we used our stash of old pre-fold cloth diapers under her whenever possible. With the night wakings, not being able to pee in peace, and suddenly doing “diaper laundry” again, the newborn comparison was very real. And much like with a new baby, I both enjoyed feeling needed and fussing over her… and was constantly shocked and alarmed by just how much work she was.

Babies grow up before your eyes, but with ducklings, they really do look visibly bigger at bedtime than they did in the morning.

My toddler showed definite signs of jealousy as his every request was met with “just a minute, I just need to feed the ducky.” As hard as it was, the worst of it lasted only two weeks. Not wanting to make the same mistake twice, this time we went ahead and splurged on three ducklings. And as much as Martha loved us, the minute she heard their weird little chirps, she suddenly looked happier than she ever had with just us. They say babies grow up before your eyes, but with ducklings, they really do look visibly bigger at bedtime than they did in the morning.

A few weeks ago, the ducks moved out to our fenced-in backyard, where they enjoy such amenities as a boxy house filled with straw and a plastic kiddie pool from Target. I still love taking care of them, I get up every morning to let them out of their house and feed them breakfast, and I’m greeted by a chorus of loud quacking and chattering. They’re wonderful animals, but they don’t exactly feel like my babies anymore.

During the hardest part of our duckling care saga, I met up with a good friend, and mentioned how tired I was. She said, “I know, but the thing is this is who you are. You take care of people and animals and whatever else you can manage to take care of. But it’s ok to admit that sometimes you have limits, too.” I knew what she meant. I spent most of my 20s desperately wanting kids and not having them, so I poured myself into caring for friends, feeding people proper dinners, rescuing kittens from alleys. It’s just that I had always imagined that once I became a parent, those urges would have a more traditional outlet, and thus they would be satisfied. It occurred to me that many people wouldn’t sleep on the couch to keep the duck company, no matter how sad the duck might be.

I hoped getting ducks would fix the urge to nurture, too. I thought maybe they would keep me busy enough. And for a few weeks, they did. But I guess it’s not about having enough babies, or enough pets, or enough poop to clean up. Maybe it’s time for me to stop seeing my urge to care for everybody as a deficit, and start treating it like an asset.