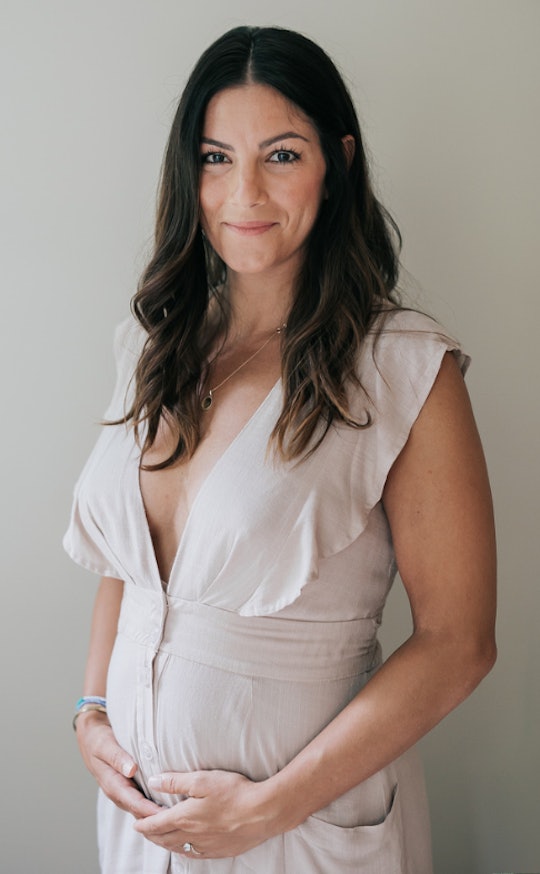 Alyssa experienced a miscarriage during her first pregnancy, and she and her husband are still trying. This is the eights installment of her Trying diary. You can read the previous entry here.

The test result reads clear as day. My knees give out and I crumble to the bathroom tile, still staring at the pregnancy test in disbelief, hoping it’s not a dream.

I’ve ached to read it for longer than I can remember. Now that I do, I question its validity. I begin to shake uncontrollably. I expect to snap out of it, jump for joy, let out a scream of victory — something. Instead, I start to cry. I’m petrified. On top of that, I’m terrified of my response. These last few months of putting every last ounce of faith in becoming pregnant again, I haven’t once thought about how I’d react when and if it actually happened. I walk out of the house, not bothering to put shoes on. Standing on the front lawn, positive test in hand, I phone a friend.

The first person I share my news with isn’t my husband. I feel guilty about that, but I don’t want to get his hopes up only to maybe get let down again. What if the test is inaccurate? What if the baby doesn’t have a heartbeat? What if the growth stops?

This is exactly what I wanted… why can’t I share it with the person I love most, who wants this just as much as me?

My friend who also recently miscarried and was blessed with a pregnancy soon thereafter puts my mind at ease. It’s easier to confide in someone who has been down this road before. She congratulates me, keeps it light and positive. She reminds me that these things are out of our control and to just continue living my life.

A day goes by and I’m still in complete denial. I can’t bring myself to tell Keith yet; I make plans to tell him later — but in an abstract way, like in middle school when I would tell my parents, “I’ll clean my room later.” This is exactly what I wanted… why can’t I share it with the person I love most, who wants this just as much as me? Why am I not overcome with happiness or that “Can't-eat, can't-sleep, reach-for-the-stars, over- the-fence, World-Series kind of stuff”? (Who said the Olsen Twins were a fad?)

I try to tell myself this reaction is warranted after having gone through something so traumatic. “Later” is now. I make my husband dinner and tell him the news over homemade marinara. He is predictably underwhelmed — which doesn’t come as a surprise, but it’s deeply saddening. I thought, after everything, this would be his “World Series kind of stuff” moment; his moment of elation. He admits he doesn’t want to get enthusiastic just yet, not with the memory of a few months prior still lingering. I’m flooded with images of commercials with phony husbands and wives, hugging and smiling, overwhelmed with bliss with the positive pregnancy test held aloft. My hope for a modicum of that Hallmark moment of has been tainted, which is something I’ll have to accept. Celebration: Postponed until further notice.

Over the next few days, we continue to live in the purgatory of not accepting our soon-to-be titles of Mom and Dad. We pretend the status quo hasn't changed. The news couldn’t come at a better time: we’re scheduled to head to Europe this week for what was originally our baby-moon. You know what they say about the best-laid plans of mice and men.

Considering, we decided to extend the trip to include my sisters and their significant others. Sure, it’s not the type of getaway we had anticipated at the outset, but being with family on a week-long European adventure? If there’s a better distraction in the world, I’m unaware.

I keep this monumental life change between me and Keith as a way of protecting myself. I’ll enjoy our vacation and face reality upon returning home. I’m technically only 3-and-a-half weeks pregnant and know a doctor’s visit is at least a month away.

Is patience really a virtue? It feels more like a thorn in my side.

More Like This
Raising Us Maybe Wrecked Her Career, But My Mom Is Thriving In Her Second Act
All Your Questions About Getting Pregnant After A Tummy Tuck Answered
My Nanny Showed Me How To Be A Mother
Infertility As A Stepmom Means Double The Alienation, But So Much Love