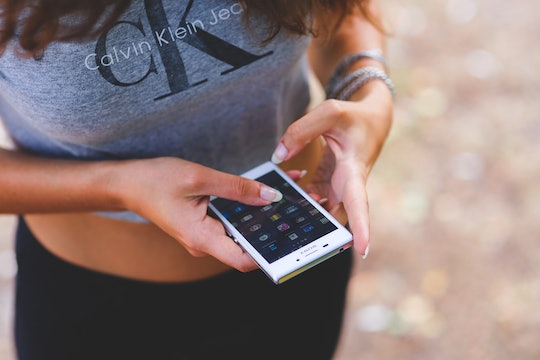 Well, it looks like there are a bunch of codes all over Snapchat after the fruit game exploded. Recently, teen girls were putting fruits on their Snapchat stories as a fun way to confuse guys. But the code was leaked, and now a bunch of other codes have popped up. Here are some secret social media codes your kids probably use to keep their business private (or for fun).

Girls used fruit to indicate their relationship status on Snapchat, but now that most people are aware of the codes, guys are using animals to represent theirs.

A pig means a guy is "talking to someone," a panda means "single," a whale means "it's complicated," a bird means you "like someone," a dolphin means he "gets hoes," and a cow means he's in a relationship, according to Reddit user jrrullo06. More animals have emerged in the game too — a frog means he's married and a dog means he doesn't want to commit, according to Empire Boo Boo Kitty. Guys are also using sneakers to represent their relationship status, according to jjrullo06, as well as video games, Wojdylo Social Media reports.

But the game has expanded beyond revealing a teen's relationship status; girls are now using colors to represent the month of their birthday. Jrrullo06 decoded what each color means on Reddit — for example, if I were to jump into the game, I'd put yellow on my story because my birthday is in August.

Guys have also started putting numbers on their Stories as revenge for the girls starting this game to keep them out of the dark — and the numbers are their shoe size.

All of this sounds pretty damn pointless, but it's nothing new. Parents have been alarmed into thinking that every time their teenager has their phone out they're sexting someone in code:

And while most teenagers' interactions on social media aren't so salacious, it is true that the way teens use social media is becoming increasingly coded — especially for girls. That's not just as a way to have fun or to create a secret conversation in the public sphere that is social media, but also as a way to increase likes and build their personal brands.

On Instagram, girls will like a friend's photo in exchange for a rating of how much her friend likes her or what her best physical feature is, TIME reported earlier this year. In the space where people tag a photo’s location, a girl's friend will leave her a TBH (to be honest) comment in exchange for liking one of her pics, such as "TBH, ILYSM,” which means, “To be honest I love you so much."

There are probably tons of other codes on social media that anyone over the age of 25 knows nothing about. But likely, this fruit and animal game won't last much longer, and that's probably good for everyone.