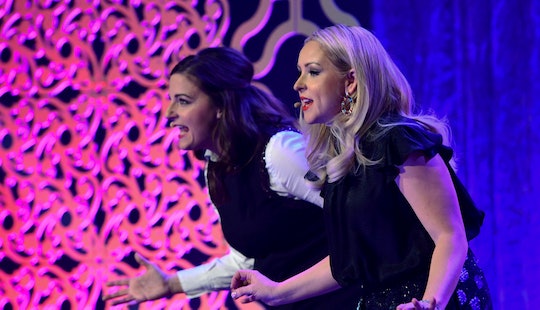 Calling all IMomSoHard fans: your favorite web series duo finished their "Mom's Night Out Round 2" standup special at the end of July. If you missed the original Mom's Night Out tour in 2017 (and the Summer Break tour, complete with husbands and kids), IMomSoHard web series creators, Jen Smedley and Kristin Hensley are still here for you. With their first original standup special headed to Amazon Prime, you'll want to see IMomSoHard live, so you can laugh at their references to Spanx and wine along with your friends.

The special airs on Amazon Prime Video, Friday, Aug. 23. Prime members can stream the show for free, and non-members can subscribe at the monthly rate of $9 (and cancel anytime) if you don't want to commit. Once you've memorized all their material, go back and watch it again, then dive into their library of IMomSoHard videos until they announce more tour dates.

The special, directed by Brian Volk-Weiss, was filmed live at the Pabst Theater in Milwaukee, Wisconsin, and features the same honest, self-effacing humor you'd come to expect from the Nebraska natives and nothing is off limits. From friendship to body image, sex after marriage to parenting fails, Smedley and Hensley aren't experts at motherhood, per se, but they sure know how to explain what moms around the world are going through (in the funniest way possible). To sum up their style of comedy might be a disservice to the intricate dance they do when performing together.

The special combines improv, standup, wine (of course), and the audience's purses (no, really — part of their act is to rummage through purses), according to The Laugh Button, giving a reminder to the (mostly) female audience they're not alone in this thing called parenting. With 200 million views of their web series across all platforms, and 2 million followers, the #IMomSoHard movement is a big one. If you like relatable content without the fluff, Hensley and Smedley drink just enough wine to say what everyone is thinking but nobody is talking about.

The pair's I Mom So Hard book was released in April and became a New York Times bestseller, preceding their Mom's Night Out Round 2 tour. By the way they feed off of one another, you'd think the two have known each other from birth. "We are both from Nebraska, went to the same school, had mutual friends, yet never met,” the IMomSoHard duo said in an interview with Babble of their friendship. "We were both doing comedy all over town and still, never met. Then one night, at an obscure underground comedy club, we were standing back-to-back and heard the other one talk about Nebraska. We were instant friends and the rest, they say, is history."

I don't want to give much more away because the special will speak for itself. Whether you're a longtime fan of Smedley and Hensley's takes on motherhood, or you're new to the IMomSoHard movement, I have a feeling you'll break out your own bottle of wine and bust out a few old school dance moves to "Ice Ice Baby" before you know it.

I Mom So Hard is now streaming on Amazon Prime Video.