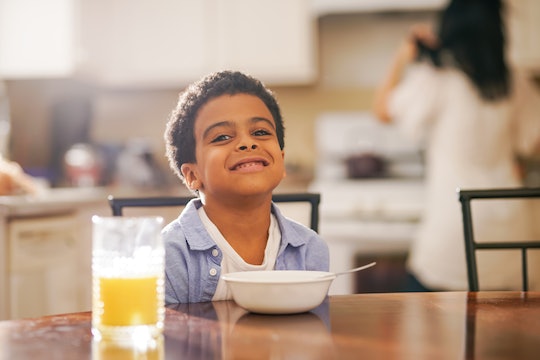 You've likely noticed that your kids ask for more of the things they see and hear on TV, in movies, or on the radio. It makes sense. They've seen it, potentially heard it's great, and now they're curious. Some facts that already seemed obvious are even more glaring when proven by science. But, in case you were wondering if there really was something behind that, a new study has found that seeing sugary cereal ads may lead to kids eating more sugary cereal after all.

The study, published by the Dartmouth-Hitchcock Medical Center, found that kids requested and then enjoyed the sugary brands they have seen recently promoted on their screen more after trying them for themselves — establishing that there really might be a link between advertising and consumer's (even the kiddo variety's) subsequent choices.

Of course, it's well-known that advertising aimed directly at kids has long been a huge concern, especially as far as what choices young minds are making in all sorts of areas.

For this study, researchers checked in with parents of 624 preschool children every eight weeks for one year to understand which network television shows their kids watched and how often they ate cereals connected to ads seen during those shows, Reuters reported.

"We found that kids who were exposed to TV ads for high-sugar cereals aired in the programs they watched were more likely to subsequently eat the cereals they had seen advertised," Jennifer Emond, lead author of the findings and a faculty member at the Geisel School of Medicine at Dartmouth College in Hanover, New Hampshire, said, according to Science Daily.

"Our models accounted for several child, parent, and household characteristics, and whether the child ate each cereal before the study started. We were able to isolate the effect of cereal advertisement exposure on kids' intake of cereals, independent of all of those other factors," she added. Geez.

With other new studies linking heavily processed foods including sugar cereals to an increased risk in cancer, as reported earlier this year by the Environmental Working Group — in which a 10 percent increase in eating soda, sugary snack cakes, processed meats, and breakfast cereals was associated with a 10 percent increase in cancer risk — you see that breakfast choices are not a minor deal at all.

So what can we all do as parents? I mean, there's other info out there that being too strict about a healthy diet might backfire, as Casey Seidenberg, co-founder of Nourish Schools, argued in an article for the Washington Post last year. But at least parents can try their best to make healthy choices overall and just be aware of the true influence that advertising has, as Emond told Reuters.

"These young children don’t buy these cereals on their own,” she told the outlet. "Instead, it’s likely that children see TV ads for these cereals and they ask their parents to buy the advertised brands." Parents may also want to consider ad-free television for their children, she advised.

Wow. This just goes to show you how vigilant you really have to be when you have young kids... and how clever and responsive a young mind is. I'm considering cutting the cable right now.