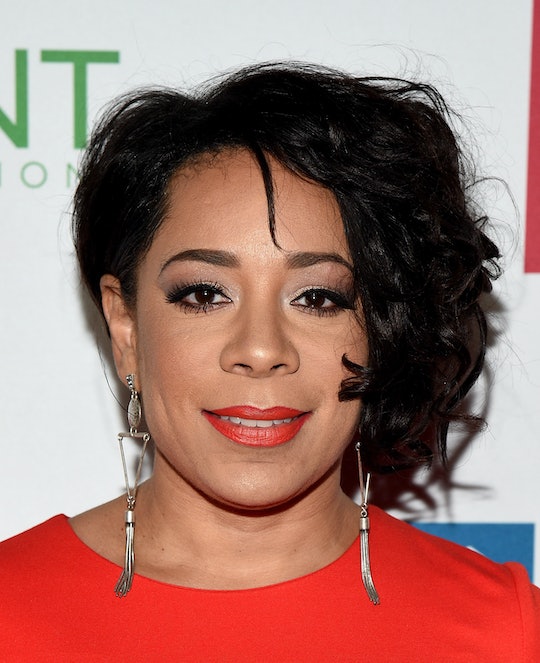 Orange Is The New Black actress Selenis Levya wants her daughter to be confident and proud in her own skin. In a recent sit down with People, Levya shared her concerns about societal pressures on body image and how that affects her daughter who, like her, is latina. But the actress is proactive in combating those pressures, and expectations, which are often detrimental and unrealistic (not to mention stereotypical) in a smart and empowering way. So how exactly is Levya teaching her daughter about body positivity?

As part of People's Mom Talk Series, Levya shared a few comments her daughter Alina had made in recent months, concerning body image, and pressure. "As a mom it's really scary to hear your child, look at herself in the mirror, and find herself not right," she said. "That's painful – I'm like, 'Do you understand how beautiful you are?'"

Levya noted that in her experience, there are a lot of girls around her daughter's age, 12 and 13, who express similar concerns over their bodies, like, having abs or being thin. "I think it's gross, I don't know how that happens, but it's really right now at this age – 12, 13, a big deal."

To combat that negativity, Levya said she often emphasizeds to her daughter that she's beautiful, and that it's important to embraces her curves. "Being Latina – we have curves honey, and there's nothing wrong with them," Levya said, of the advice she'd shared with Alina.

Self-love, confidence and body positivity are important topics to reinforce with teens, especially since studies have shown that kids and young adults are increasingly developing concerns about body image at earlier and earlier ages.

According to a report by Common Sense Media, a 2010 Hayes & Tantleff-Dunn study revealed that children as young as 5 and 6 hoped for a body size thinner than their own. The report also highlighted a 2010 study by the Girl Scouts Research Institute that revealed 48 percent of girls age 13 to 17 wished they were as skinny as the models they saw in magazines.

Levya also noted that a child's body goes through many changes as it develops — yet another important reason she hopes children don't succumb to body image pressures like the ones plaguing her daughter. "One day [Alina's] like one size, the next day, we're like 'oh that doesn't fit anymore, how does that not fit anymore?'" she said. "But it's not a weight thing, it's just that your body is continuously changing. And that's my issue and concern right now [...] body image."

With so many online avenues and social media platforms to name, both children and adults are increasingly susceptible to images and messages that shame all body types – both through fat shaming and thin shaming. Body positivity continues to be an important practice for everyone, children and adults alike, and that makes Levya's advice to her daughter especially refreshing.