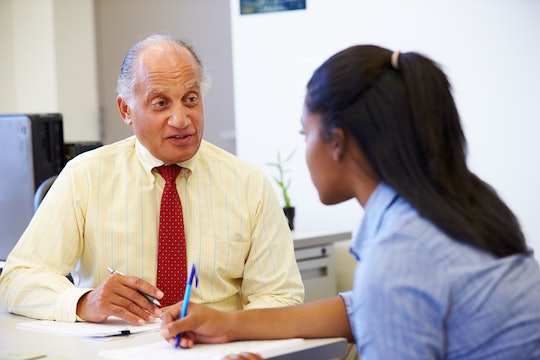 There are a lot of stigmas around mental health that can make it difficult for teenagers to find adequate support. It's very easy for teenagers to feel alone, which can make these issues worse. A study has found that self-harm in adolescents is a major concern, so how are schools addressing it?

Self-harm (also known as self-injury) refers to anytime someone "intentionally and repeatedly harms themselves in a way that's impulsive," but not meant to be fatal. According to Mental Health America, the most common forms of self-harm are skin cutting, head banging or hitting, and burning. It is far more common in adolescents than adults, with MHA noting that about 15 percent of teens report a form of self-injury.

"Self-harm typically starts at about age 14. But in recent years we've been seeing kids as young as 11 or 12. As more and more kids become aware of it, more kids are trying it," Karen Conterio, author of the book, Bodily Harm, told WebMD.

The reasons why people self-harm vary. By itself, self-harm isn't a mental illness. It is often a coping method or a symptom of other mental health issues like borderline personality disorder, bipolar disorder, or anxiety, as noted by WebMD.

Knowing that it is a prevalent concern, with a wide variety of causes, how can schools best address self-harm?

A study published in the American Journal for Public Health found that self-harm affects nearly 1 in 4 teenage girls in the United States. Overall, the Atlanta Journal-Constitution reported that 17.6 percent of respondents in the study reported at least one non-suicidal self-injury (NSSI) act the year prior. Self-harm was found to be a big concern in other countries, too.

In a survey-based study of 153 secondary schools in England and Wales, staff said that self-harm is an important concern, as reported by EurekAlert. However, only 53 percent of schools had received staff training on self-harm, according to EurekAlert, and only 22 percent of those schools considered the training they received to be adequate.

Access to school counselors is really important, not just when addressing self-harm but any mental health concern. They can often help refer students and parents to other specialists in the community, as outlined by Good Therapy. But, it's not just school counselors who can help.

The Cornell Research Program on Self-Injury and Recovery noted that all teachers and members of the school staff, from janitors to administrators, should be trained in self-injury protocol. The Cornell Research Program noted that learning how to respond with "respectful curiosity" is fundamental, as well as learning how to continue the conversation with students who try to shut it down.

Respectful curiosity requires people to not be visibly dramatic in response, such as responding with horror or shock, and asking questions to help in getting important and helpful information. Those questions include ones like "what do you notice is happening for you when you self injure?", as outlined by Psychology Today.

In the American study, researchers want school-based and community health programs to improve how they address the risk factors, as reported by the AJC, and “efforts to prevent NSSI should be incorporated into broader efforts to address mental health among children and adolescents.”

Self-harm in adolescents isn't going to disappear by itself. Teens spend a lot of time in school, so it's important that schools, and all members of its staff, are equipped to help those who need it.