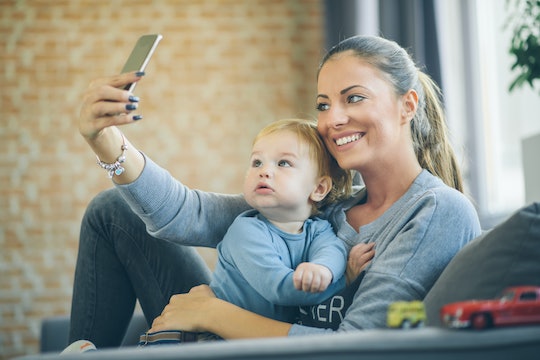 You Can Actually Be Addicted To Taking Selfies, According To Science

Look out, Paris Hilton, Kim Kardashian, and the 10 million other folks who raise their phones (at a flattering angle, of course) to take selfies daily: addiction to taking selfies may be a real condition, according to a recent study by researchers in the United Kingdom and India. They're calling the photo-taking obsession "selfitis," a term that was, ironically enough, first used in a spoof news story in 2014.

The study, which was published in the International Journal of Mental Health and Addiction last month, surveyed 400 university students in India using social media. According to the research paper, researchers chose to zero in on Indian students since the country is home to the highest number of Facebook users — and the country has also racked up the largest number of deaths due to selfie-taking during dangerous circumstances.

The researchers first looked at how many selfies participants were taking during an average day, and whether those selfies were simply sitting idly on their phones or being posted to social media. They then asked participants to rate how strongly they agreed or disagreed with phrases like, "Taking selfies provides better memories about the occasion and the experience," "I become more positive about myself when I take selfies," and "I post frequent selfies to get more ‘likes’ and comments on social media."

"Typically, those with the condition suffer from a lack of self-confidence and are seeking to ‘fit in’ with those around them, and may display symptoms similar to other potentially addictive behaviours," Janarthanan Balakrishnan, a research associate in psychology from Nottingham Trent University, told The Independent recently.

Other researchers, however, weren't entirely convinced by the selfitis study. "Selfitis doesn't exist, and it shouldn't exist," Mark Salter, a spokesman for The Royal College of Psychiatrists, told The Telegraph. "There is a tendency to try and label a whole range of complicated and complex human behaviours with a single word. But that is dangerous because it can give something reality where it really has none."

Despite the new study, the American Psychiatric Association still does not recognize "selfitis" as a genuine condition, nor is it listed in the latest edition of the Diagnostic and Statistical Manual of Mental Disorders.

Regardless of whether selfitis counts as an actual condition or not, though, the study in India still raises some interesting questions, both for social media users and parents.

First of all, how much is too much? Personally, if I can't stop doing something (to use a very real example, let's say drinking coffee), I know that I've got at least a slight dependence on it. And in the same way that I rely on coffee to help me feel awake and focused, many social media users — judging by this recent study — use selfies in order to feel accepted by their peer group, to boost their confidence, and to quell their stress levels.

Second, the study helps highlight how much we still have to learn about how our constant technology use affects us. Research has already found that constant phone checking can be linked to higher levels of stress, and while internet addiction hasn't been classified as an actual disorder, studies have found that a portion of the population definitely has disordered internet gaming use. In kids, one study found that more screen time was linked to a lowered ability to read others' emotions.

Clearly, we've got a lot left to discover when it comes to how human brains — especially young human brains — interact with technology. And that, regardless of selfitis' validity, is a good reason to keep kids' tech use (and our own) in check.