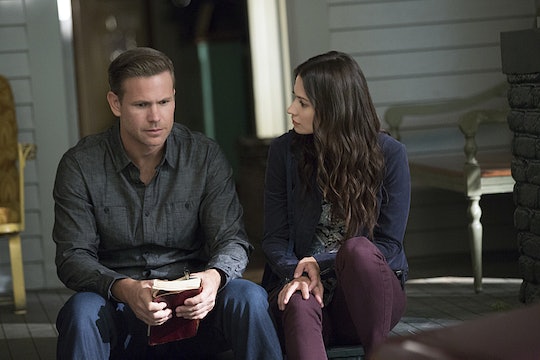 The characters of Mystic Falls have thrown fans a few curveballs throughout these last eight seasons, but the writers truly outdid themselves during Friday night's episode "An Eternity of Misery." You see, it turns out that Sybil wasn't the only Siren running around out there. Apparently, there were two trapped down in that basement, which meant poor Stefan was in way more trouble than he realized. Seline is the second Siren on The Vampire Diaries and it truly was an amazing twist.

For those of you scratching your heads wondering who the heck Seline is, let me help you out here. Remember the nanny Alaric hired to watch over his adorable kids played by Kristen Gutoskie? Yeah, that would be Seline. At first, it looked like Georgie was the second Siren sister in question, but as per usual TVD was just messing with its fans. Georgie trapped Alaric in the basement not because she wanted to, but because Seline was controlling to do it. And while that's great news for any Alaric-Georgie 'shippers out there (or it was until she died), that doesn't leave his life completely in the clear, especially since she's been watching over his children for a while. And as this show has more than proven throughout the years, that can't be a coincidence.

Right now it has yet to known what Seline's endgame is when it comes to Alaric's twin girls, who are part of the Gemini coven and known siphoners of magic. Does Seline know this and intend to use their powers for the greater evil? Or is this all part of what their real boss, Cade, wants? According to Sybil, he is basically the devil himself, so I'm sure he could find good use for those sweet, innocent girls.

Either way, I am very into this storyline right now. The last few seasons of The Vampire Diaries have been somewhat lackluster in my opinion. But this plot has really rekindled my old obsession with a vengeance. Seriously, this is like old school TVD right now and I am not complaining. So bring it on, writers, because I am here for this.