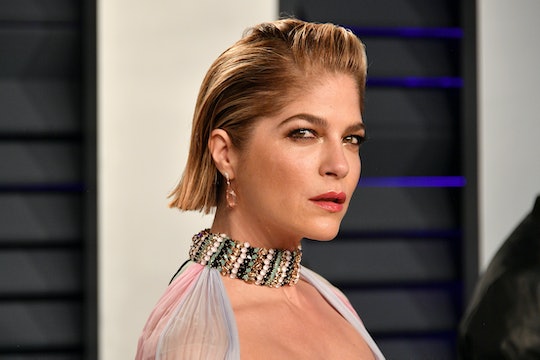 Selma Blair publicly revealed back in October that she is living with multiple sclerosis, a chronic disease that affects the central nervous system. At the Oscars on Sunday, the actress appeared on the red carpet rocking a custom cane she now uses to help with her mobility. But in a recent sit-down interview with Good Morning America, she opened up about the challenges she faced trying to get answers prior to her diagnosis, and her story is one many women will find familiar. Selma Blair said doctors initially dismissed her MS symptoms as mom exhaustion, and it meant she had to live for years with health issues she couldn't explain.

In her original Instagram post, Blair explained that she'd been formally diagnosed with MS in August 2018, following an MRI that found lesions on her brain. But that was far from the beginning of her journey; in her post, she wrote that she'd "probably had this incurable disease for 15 years at least." And during her chat with GMA's Robin Roberts, Blair explained that, after giving birth to her now-7-year-old son Arthur, she'd been "in an MS flare-up and didn't know."

Yet, despite experiencing crippling and very concerning symptoms — like falling, and extreme exhaustion that was interfering in her ability to do normal, daily tasks — Blair said she wasn't taken seriously.

"I was giving it everything to seem normal, and I was self-medicating [with alcohol] when he wasn't with me ... there were times when I couldn't take it," Blair told Roberts. "And I was really struggling with how am I going to get by in life? [I was] not taken seriously by doctors. Just, 'single mother, you're exhausted, financial burden, blah, blah, blah.'"

With her concerns being brushed off, Blair explained that she put pressure on herself to continue working and caring for her son despite her physical symptoms, and said she'd reached the point where she could hardly drop her son off at school without being completely wiped out.

Blair told Roberts, "I'd drop my son off at school a mile away, and before I got home, I'd have to pull over and take a nap. And I was ashamed, and I was doing the best I could, and I was a great mother. But it was killing me."

As infuriating as it may be to think that Blair's MS could have been brushed off for so long as simply being "the rigors of motherhood," she's certainly not the only woman to have her very real symptoms downplayed.

Studies have found, for example, that women who go to a hospital emergency department for abdominal pain, are expected to wait longer for treatment than men, and they also receive less pain-relieving medication, according to The Independent.

What's more, women with chronic pain conditions are also more likely to have their concerns attributed to mental health issues than a physical one, and according to Women's College Hospital in Toronto, Canada, doctors are "more likely to refer women to a therapist rather than a pain clinic."

In an interview with Vanity Fair published Tuesday, Blair explained that she also felt the need to downplay her own symptoms at times, too — and it's one reason why she now feels it's important that she speaks out. Blair told the magazine she "put on a good face" with her previous doctor "because he was a man ... [and] I wanted him to think I was doing well," but that all it really meant was that it became easier for him to assume her symptoms weren't that serious.

What's more though, is that Blair said that feeling the pressure to prove she was a good mom despite her pain and physical symptoms also made her downplay what she was experiencing. According to Vanity Fair, she said,

I had been so embarrassed by some events in my life, whether it was drinking or immature behavior, that, as a mother, I wanted to prove I was great even when I was telling someone I had problems. That’s a shame. So, [now] I'd like to counterbalance it by being really honest about how I am.

As hard as it is to think that Blair had to live with undiagnosed MS for as long as she did, it's also not that difficult to understand why. Not only is it harder for women in general to have their pain-related complaints taken seriously, there's also the assumption that being overwhelmingly exhausted and struggling is somehow just a normal part of motherhood. And, as Blair accurately noted, so often a lot of that pressure is internalized — if motherhood is supposed to be grueling, then it's easy to feel like we're just "complaining," when in reality, there may be a serious health condition behind our struggles.

The good news for Blair, at least? She told GMA that her doctors expect she could actually have "90 percent of [her] abilities back" within a year, which is definitely encouraging. In the meantime though, Blair's willingness to open up about her illness is serving as an important reminder to women that, while gender bias in medicine may urge us to downplay our symptoms, it's important to keep pushing forward until someone actually takes them seriously.