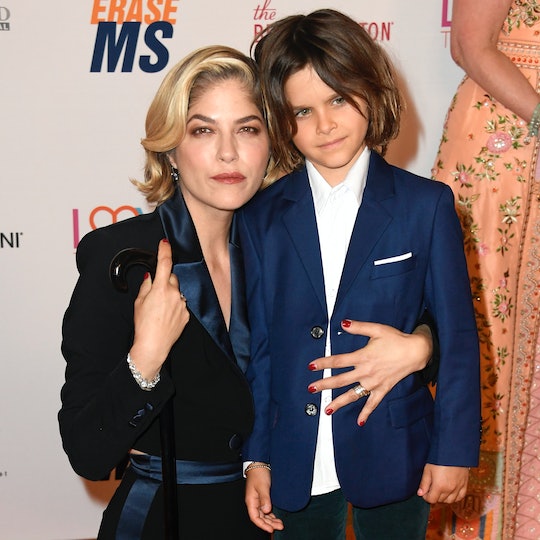 Living with a chronic illness can be incredibly challenging, both physically and emotionally. With that said, living with a chronic illness as a parent adds a whole new layer of difficulty to the experience. Because not only do you have to cope with your illness and just try to get muddle through each day — you also have a child depending on you, too. It can incredibly overwhelming. Oftentimes, you might even find yourself feeling like a failure. However, Selma Blair's latest red carpet appearance confirms she's already a "useful mom" and more.

If you remember, Blair, 46, revealed her multiple sclerosis diagnosis in October, according to The Hollywood Reporter — and has since been raising awareness for the incurable disease. As People reported, the Cruel Intentions star recently attended the 26th annual Race to Erase MS gala, at which she was an honoree. She hit the red carpet on Friday, May 10 while wearing a custom Christian Siriano tuxedo and a black cane, according to the publication.. By her side were her 7.5-year-old son, Arthur, and friend/fellow actress Sarah Michelle Gellar.

“I have to say that I am afraid that I will fall, and I have the best 'fall-bearers' in the world," Blair said after taking the stage, according to E! Online. She went on to thank her Cruel Intentions costar along with the movie's director Roger Kumble for their ongoing support. “There were much more eligible people that wanted this job, but with my will and grace, and Sarah and Roger, I got it,” Blair shared, according to People. “She fought for me then, and she is fighting for me now, so that is why this fight is so much easier.” Blair later added:

My dream is that I get to be a useful mom, as long as this kid wants me, which is about one more year.

(Side note: Is age 8 really when parents stop being cool? Asking for a friend ...) Jokes aside, it's clear that Blair is more than living up to this dream of being a "useful mom" already. Because through her strength and determination, she's setting a pretty amazing example for Arthur as it is.

Gellar, who actually introduced Blair at the event, seems to agree. “I’ve been friends with Selma for more than 20 years, so I thought I knew everything there is to know about her. Mostly because she has no filter," Gellar said, according to Variety. "But in the last year I have seen a new side to her. Sure, she’s an incredible mother and friend, but now I know how brave she is." Gellar continued:

It would’ve been not only easy, but understandable, for Selma to hide when she received her diagnosis. Instead she’s done the exact opposite. She is facing this head on and sharing this journey with the world. And while it may not be pretty, it’s real and it’s selfless. I don’t think there is a stronger person I know.

After Friday's event, Blair took to social media to post photos from the night — sharing that her attendance was for her son. “This child,” she wrote alongside a closeup of herself and Arthur on the red carpet. “He sees me at every stage. And tonight was for him in my heart. To thank him and everyone who has rooted for me and for all of us with #MS and autoimmune disease. We thank you.”

Honestly, I'm in awe of Selma Blair's strength and bravery in the face of a crushing diagnosis. I, too, have been diagnosed with a chronic illness. And although it's nowhere near as debilitating as MS can be, I've experienced firsthand how difficult it can be living with an ongoing health condition as a parent. Even on her worst days, there's one thing Blair won't ever have to worry about: Being a "useful mom." Because she's already so, so much more.