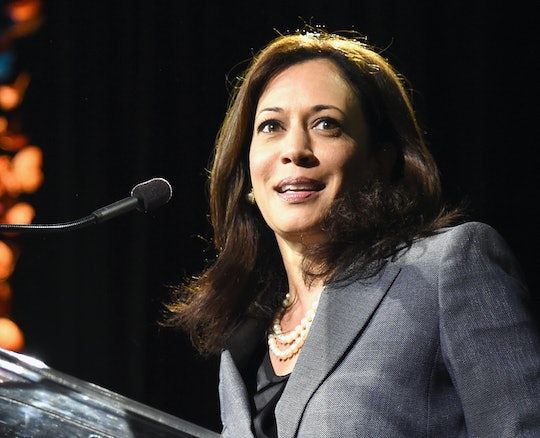 Tuesday's Senate Homeland Security and Governmental Affairs Committee hearing heated up rather quickly, coming to a head when Sen. Kamala Harris was scolded for doing something that male senators do all the time. Harris, engaging with multiple lawmakers and leaders, demanded direct answers to her questions, and went about it tenaciously. The male politicians she was questioning quickly grew frustrated, and attempted to quiet her, simply for doing her job.

"Imagine sir, if you will," Harris asked Homeland Security Secretary John Kelly, "that you were a local law enforcement leader presented with a choice of either complying with federal law that means you may expose your department and your jurisdiction to civil liability or forfeiting DHS funds that are designed and intended to help you fight terrorism at a local level. Wouldn't you agree that puts those law enforcement leaders in a ... Hobbesian choice?" she asked. "Well, senator—" he began, with Harris adding: "How are they supposed to choose? "Had you not cut me off," Kelly asserted, "I would have said the same thing you just said, probably not as eloquently."

The conversation continued, with questions escalating in speed. Kelly grew frustrated with the uptick in tempo, and asked Harris at one point, "Can you at least let me finish once before you interrupt me?"

But this was just the tip of the iceberg. As Harris questioned Deputy Attorney General Rod Rosenstein, similar tensions arose. Posing a yes or no question regarding the independence (or lack thereof) of Special Counselor Robert Mueller, Rosenstein failed to give Harris a straight answer. Committee Chair Richard Burr then chimed in to give him somewhat of an out, diverting the inquiry for witnesses later on. This didn't sit well with Harris, who expressed that her questions were being evaded; "This witness has joked ... of his ability to filibuster," she said of Rosenstein. Rosenstein insisted he was not joking, but still managed to avoid answering her prompts.

Others, including NSA Director Michael Rogers, also grew frustrated by Harris' forcefulness. When Rogers claimed that Harris was trying to trip him up, he asked: "Senator, if you could, could I get to respond, please, ma’am?" "No sir," she told him, "no," completely commanding the room. Burr chided Harris, asking her to "provide the witnesses the courtesy, which has not been extended, fully across, for questions to get answered."

Despite attempts to undermine her, Harris didn't tire. Viewers on social media began to applaud her toughness, comparing Harris to Wonder Woman, with a law book instead of a lasso. "The American people deserve to know whether the special counsel is fully independent," she tweeted later on Tuesday. "We need the truth. I won't stop until we get it."

Harris has made it clear she won't let anything — especially sexism — get in the way of her search for truth. Here's hoping her male colleagues learn to respect that soon.