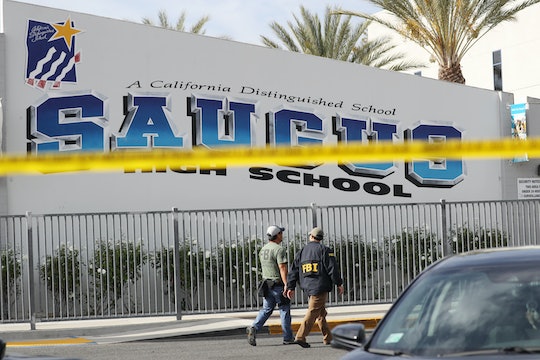 Another school shooting on U.S. soil made headlines Thursday after a gunman shot five students at Saugus High School in Santa Clarita, California, two of whom were reportedly killed and others injured. While most of the nation likely heard about the shooting on the news or from a text, a senator learned of the California school shooting as he was delivering a speech on measures to help prevent gun violence.

On Nov. 14, Sen. Richard Blumenthal was delivering a speech on the Senate floor when he was informed of the attack, as he shared on Twitter. The Democrat from Connecticut was in the middle of telling his fellow lawmakers they were "complicit" in shooting deaths across the nation if they didn't take action on legislation involving gun reform. That's when an aide passed him a written note.

"And we are complicit in these deaths if we fail to act," Blumenthal said, then pausing so he could read the message. With a change in tone, he continued, "As I speak, on the floor right now, there is a school shooting in Santa [Clarita], California. How can we turn the other way? How can we refuse to see that shooting in real time, demanding our attention, requiring our action? We are complicit if we fail to act. It is not just a political responsibility, it is a moral imperative."

The school shooting in Santa Clarita happened approximately an hour after Mississippi Republican, Rep. Cindy Hyde-Smith, blocked a motion to hear the background checks bill, according to BuzzFeed News. If passed, the bill, H.R. 8, would "require a background check for every firearm sale," a measure 92% of people who participated in a 2018 Gallop Poll favored. Additionally, 70% of respondents from the same poll said that requiring background checks for all gun sales would be "very effective."

The timing of it all — the blocking of the bill and Blumenthal learning of the shooting — wasn't lost on concerned citizens also watching the news unfold from afar. As one Twitter user wrote, "Thank you @SenBlumenthal. Sane Americans support and join you in the fight for reasonable gun control legislation."

Following his speech on Thursday, Blumenthal tweeted, "To the victims and families, we can't take back the loss and fear you're feeling, but we'll keep fighting to end this epidemic of violence."