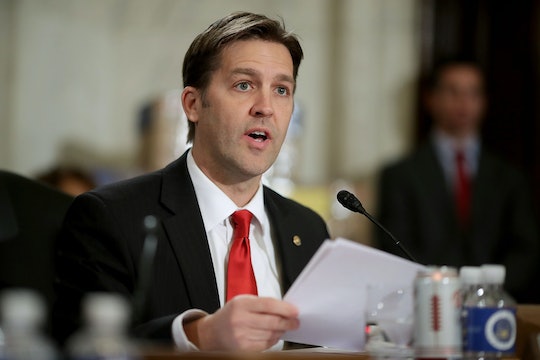 Entitlement. That's the one-word baby boomers love to use to describe millennials, including old ones like me. Millennials have inherited a scorched earth, but anyone born before the United States really went to crap believes anyone under 35 is coasting on their parent's dime. Ask Republican Senator Ben Sasse from Nebraska, and he'll tell you the new generation will become just as "lazy and self-centered". At least, that's according to The Vanishing American Adult, his new book that says we're raising entitled kids. I call BS.

According to the National Review, Sasse's new book, which I admit I haven't read entirely (only the excerpt and National Review's article), claims that "'our kids are not ready for the world they are soon going to inherit.'" That's because, as the National Review summarized, children in the United States are "often over-medicated, hooked on screens, failing to venture out into the world, losing touch with religious faith, and increasingly 'intellectually fragile'." To properly prepare kids for the future, Sasse argues that they "need to understand mortality, mix with older generations, develop strong reading habits, put production before consumption, nurture a strong work ethic and travel beyond their comfort zones."

In other words, Sasse must spend 320 pages promoting the "pick yourselves up by the bootstraps" ideology that his political party has made hard for this generation to adhere to — without taking responsibility for that fact.

Case-in-point, according to the National Review, Sasse writes that "'the meaning of America is not in its government or its elected officials'," but in the American people. As the book's subhead suggests, America needs to go back to the age of self-reliance — no more coddled kids, damn it.

But that's a load of crap. Today's generation of Americans make less and pay more. Quartz, in fact, has an excellent write-up on how the baby boomer generation — and to an extent, Generation X, of which Sasse belongs — screwed up the country for generations that followed. The millennial generation is dealing with a higher cost of living with far less job security and far less opportunity. And elected officials like Sasse are voting down laws that would make it much easier for us to raise independent, well-rounded children.

Here's a bit of truth: Self-reliance today doesn't look the same as it did in 1970s. The television becomes the babysitter when you can't afford daycare on a too-low-for-your-experience salary. Travel becomes an unattainable dream when more and more businesses hire part-time without benefits. And getting ahead in life becomes impossible when you have elected officials who refuse to increase the minimum wage or protect social safety nets that allow Americans to move out of poverty.

But that doesn't mean the next generation of kids like my toddler will become "entitled." I suspect the opposite will be true: That he will have to struggle much harder to achieve one-tenth of a fraction of what his parents earned.

Sasse is right on one thing: The next generation of kids won't be ready for the world they'll inherit. But it's not because of the "broader cultural assumptions that made parenting, paradoxically, more time consuming and ever-present and yet simultaneously less goal-oriented." Our children won't be prepared because, like us, they won't have access to cheap houses, good jobs, and affordable education like the older generations had. It will be because they, like us, will not have the benefits and opportunity to achieve that elusive "American Dream."

It will be because the very people who tell us to pull ourselves up by the bootstraps will continue to pass laws and implement policies that make life a hell to live.

More Like This
Your Disney+ Subscription Is About To Get More Expensive
The Worst Fake Babies In The History Of Movies & TV That Will Always Be Unsettling
What Parents Need To Know About Hulu's Predator Prequel Prey
10 Cozy, Romantic, & Drama-Filled Shows To Watch If You Love 'Virgin River'