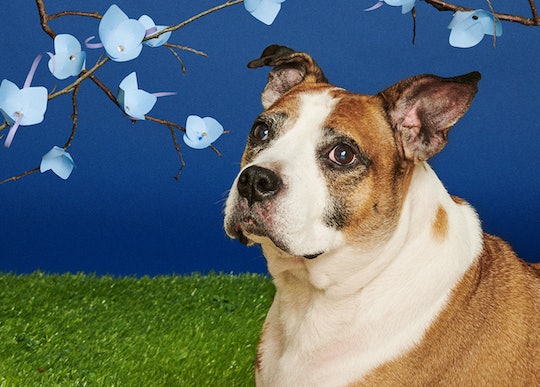 Courtesy of The Senior Superlatives Project

There's no denying the cuteness of a puppy, but they aren't the only canine age group that can bring joy and comfort to a family. This sentiment is something art director Diana Weisman and her partners set out to prove with "The Senior Superlatives Project," a heartwarming photo series featuring adorable older shelter dogs up for adoption at Second Chance Rescue.

"This series reminds us that age doesn’t matter when it comes to the love a dog has to give or their quality of life," Weisman tells Romper. "Personality, potential, and possibility exist in every shelter animal if they are given the chance."

Beyond being totally adorable, the series also serves as a reminder that not every older shelter dog has used up the best years of their lives. "Some seniors are slow, they are tired," Weisman, who works for Romper's parent company, says, "but even if they are, there are moments when you want to just cuddle up with a dog. Or you want to just have a relaxing day and have someone near you. But there are also seniors that are wild with high energy.

"This idea that every senior is brittle and ready for death is so untrue."

Each portrait in the series pairs a dog with a superlative to help people envision a life with these animals and the possibilities of their future. Titles awarded include Woody the "Best Listener," James your "Future Car Ride Companion," and other similarly adorable superlatives.

Weisman and her all-female crew made up of passionate photographer Julia Comita, props specialist Sasha Flimlin, and other volunteers brought the senior pups to life through imagination and playful posing. Like one older pup named Elvis who's "Most Likely To Think They're A Lap Dog" or a sweet beagle named Brooklyn who's "Most Likely To Make Your House A Home."

Or Oscar, who will always be down for a night of Netflix. Or Porkchop, who's most likely to be a "Future Social Media Star."

Then there's Sherlock, who's been hailed as a "Future Trailblazer" and Petunia, who earned the title of "Most Gentle."

The cruel reality is that, as The Dodo reported, senior dogs make up the majority of the 1.2 million dogs put down at shelters every year in the U.S. Fortunately, though, the number of older shelter dog adoptions seems to be on the rise. In fact, a 2017 survey conducted by The Grey Muzzle Organization, which provides grants to help at-risk senior dogs at Safe Harbor and dozens of other rescue groups and animal shelters around the country, more people are open to bringing home an older dog who already knows how to fit into family life. These are precisely the kinds of dogs that Weisman and her team are bringing into the spotlight.

All of the dogs featured in the series — aside from those who have already been scooped up (my apologies to fans of "Best Listener") — are available for adoption at Second Chance Rescue in New York City. Contact the shelter to learn how to give one a furever home.

More Like This
This Dog Food Company Is Using Unusual Ingredients To Create Healthier Treats For Your Pup & The Environment
Family Of Grandfather Killed In Highland Park Mass Shooting Say He "Saved" Their Lives
What Exactly Are Minions, Anyway ?
Is It Safe To Keep Using Period & Fertility Apps In A Post-Roe America?