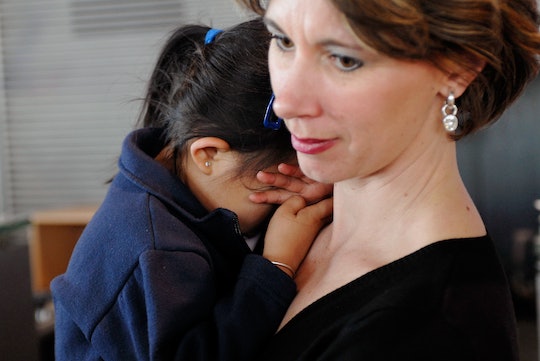 While the Trump administration's "zero tolerance" policy responsible for the forceful separation of thousands of immigrant families has ended, the effects endure. And now the U.S. government has been ordered to provide mental health services to those separated immigrant families, many of whom were taken without knowing where their family members were being held or when they might see them again.

More Like This
Everything You Need To Know About Prince Harry & Oprah Winfrey’s Series
The Obamas’ New Family Rule? Get Vaccinated If You Want To Hang Out With Us
10 Hilarious Tweets That Perfectly Capture What Moms Are Going Through
Therapist Says: Alone Time For Moms Is A Necessity, Not An Indulgence

On Tuesday, Nov. 5, a federal judge in California ruled the government is now required to provide mental health services, psychological counseling, and other treatment to families separated at the southern border, according to The Hill. The ruling — which went down at the U.S. District Court in Los Angeles — explained the Trump administration could be held accountable for the psychological damage its separation policy has had on migrant families. And Judge John Kronstadt didn't mince words. Judge Kronstadt found the U.S. government took “affirmative steps to implement the zero-tolerance policy,” and that it caused “severe mental trauma to parents and their children," according to The New York Times.

“This is truly groundbreaking,” Erwin Chemerinsky, dean of the University of California Berkeley School of Law, told The New York Times. “The court is recognizing that when a government creates a danger that inflicts trauma, the government is responsible for providing a solution. It is not something I have seen a court do before.”

Family separations were an attempt by the Trump administration to deter migrants from entering the U.S. at the southwestern border — where they have been presenting themselves with the hopes of seeking asylum in large numbers. The zero-tolerance policy made it so those who crossed the border illegally were criminally prosecuted and jailed. According to the U.S. government, this process couldn't be carried out unless children were removed from their care.

Originally, the government reported 3,000 children were separated from their parents because of the policy. In October, however, the federal government reported an additional 1,556 separated migrant families between July 2017 and June 2018, Time reported. Although the zero-tolerance policy was officially suspended in June 2018 — and a federal judge ordered the U.S. government to reunite affected families — hundreds of families are similarly separated today.

Of course, the idea that forced family separation is psychologically damaging to families isn't a new one. A June 2019 study published in Social Science & Medicine found 32% of children at a detention center showed signs of emotional problems. This study consisted of interviews with 425 mothers of children at the detention center, who completed a questionnaire about their kids' mental health.

"Overall, we found high rates of emotional distress in these children," said one of the study's authors, Sarah MacLean, who is a medical student at the Icahn School of Medicine at Mount Sinai, in New York. Children in this study had symptoms such as, "wanting to cry all the time, wanting to be with [their] mom, conduct problems, such as fighting with other kids, or having temper tantrums, peer problems, so not having a lot of friends, or only wanting to interact with adults," MacLean said.

As horrifying as the zero tolerance policy was, it's encouraging that the U.S. government is being held responsible for the psychological trauma suffered by migrant families separated at the border. Hopefully, the ruling sticks and is enforced. Because these families have suffered enough.