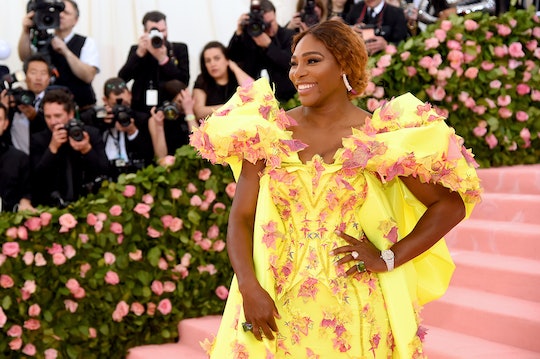 Serena Williams has always had her own unique style, and her look for the 2019 Met Gala was no different. While the champion tennis player opted for a gorgeous yellow gown, it was her shoes that totally stole the show. Serena Williams' 2019 Met Gala look included sneakers — Nike sneakers, in fact, that matched her gown perfectly. Game, set, match!

According to E! Online, Williams' gown was a neon yellow custom Versace dress. It featured pink and purple fabric accents throughout, along with large puffy shoulders and a massive train. But still, the sneakers, which must have been significantly more comfortable than most of the other shoes worn by guests, were the eye-catching accessory for Williams.

Needless to say, the internet was immediately obsessed with Williams choice of footwear for the evening. The more photos of Williams' look that were revealed online, the more people took to Twitter to sing her praises.

"Serena invented wearing sneakers with gowns!!!!" wrote on Twitter user, who added: "I'm gagging," along with the heart eyes emoji. (I genuinely hope they were not actually gagging though!)

Other tweets included many complimentary words, like "queen," "very fitting," and "my ideal vibe."

As you might remember, Williams does enjoy wearing sneakers to black tie functions. She wore sneakers to Prince Harry and Meghan Markle's wedding in May 2018, as Business Insider reported at the time. In 2017, she wore sparkling silver sneakers to her own wedding, as seen on Wedding Chicks.

While the sneakers were a total scene stealer for Williams, it must be noted that she was joined by her husband, Alexis Ohanian. While many couples like to go for the matching vibe at big events like the Met Gala, Ohanian decided to go his own route so that both he and Williams could shine on their own terms.

Real talk: Do you think Ohanian is jealous that Williams got to wear sneakers? I would be!

In case you were wondering where you can buy the sneakers Williams wore to the 2019 Met Gala, I have bad news: that's probably unlikely to happen. The sneakers were made custom for Williams, as reported by E! Online, which makes sense since they match her gown so perfectly.

However, JustJared notes that Williams is wearing Off-White for Nike sneakers, which are a brand available to purchase — if you're down to pay a pretty penny. If you search for the Off White line on FightClub.com, the cheapest pair you'll find are listed for a cool $240. Disclaimer: that's for the toddler size. The highest price of Off White for Nike sneakers listed on the site go for $3,600 which is about two months rent for me.

Regardless of how much you're willing to spend on sneakers, Williams looks stunning in her 2019 Met Gala look. Hopefully she picked out a matching outfit in a toddler size for her daughter, Alexis! Now that's a red carpet photo we would love to see.