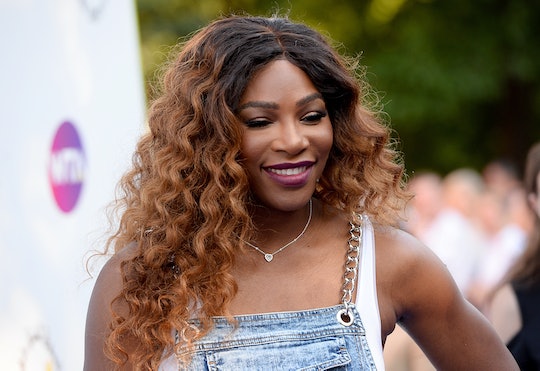 From her baby shower to her due date, there's been a lot of speculation surrounding Meghan Markle's pregnancy. But now that her due date is actually approaching, a few of those details are now being shared with the rest if the world. And thankfully, Serena Williams confirmed she planned Meghan Markle's baby shower, and TBH, it sounds nicer than anyone ever imagined.

Until now, there was only so much royal watchers knew about (or speculated about) Markle's late February baby shower, which took place in New York City, according to The Cut. It was reported at the time that Williams hosted the shower alongside Markle's longtime friend, Genevieve Hillis, according to Harper's Bazaar. But almost everyone remained tight lipped about it... until now that is.

In the newest edition of Business of Fashion magazine, Williams confirmed that she did indeed help plan Meghan Markle's stateside baby shower earlier this year. Although she didn't reveal too many details about the bash (she has her privacy to maintain, after all), she shared that she did put a lot of thought behind her friend's big day. "Planning something like that takes a lot of effort," she told the magazine. "I'm a perfectionist, so I'm like, 'Let's make it perfect.' It's been a lot these past few days."

Her quote about this baby shower is a testament to their friendship. Planning an event for a friend, like a baby shower, takes a lot of hard work and effort. It's not about being a perfectionist, it's about putting in the attention to detail that will make the guests (and the guest of honor) take note. Guaranteed Markle loved this about her shower.

This can understandably be a little draining. But, it's so much better having one of your best friends plan your baby shower than some random party planner who doesn't know who you are or what you like.

Kudos to Williams for pulling out all the stops for her best friend, all while juggling her career as a tennis player and being a mom to her super cute daughter, Alexis Olympia Ohanian.

Based on everything people know about Markle's baby shower, it sounds as if Williams' efforts were well worth it. The shower reportedly took place at The Mark hotel's penthouse suite, according to Vanity Fair, where Markle and her closest friends hung out and celebrated Baby Sussex. CBS This Morning host Gayle King (and bridal shower attendee) later revealed that guests even got to make their own floral arrangements, which were donated to charities at Meghan's request.

"It was a very, very small private affair, and just a very special time for her," King said afterwards on CBS This Morning. "Because having a baby is a great thing, let's not lose sight of that."

It sounds like Williams did everything she could to make it a special day for her bestie, who she met at a party in 2010, according to the Independent. And that probably meant the world to Markle, especially since she doesn't get to see her friends as much as she used to, as she's now living in the United Kingdom and busy making royal engagements and all that good stuff.

If there was any perfect way to celebrate Baby Sussex, this would be it.