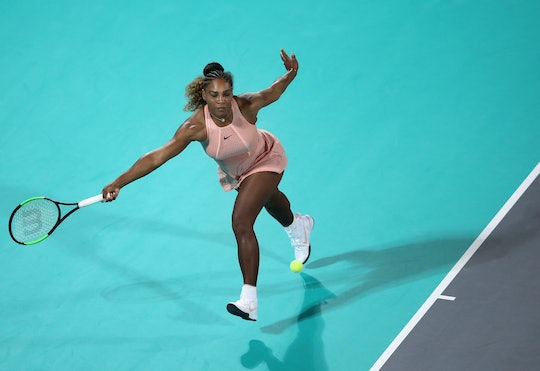 Serena Williams' Daughter, Olympia, Adorably Cheered Her On During A Tennis Match

Serena Williams has a ton of fans, but no one is a bigger fan of hers than her 1-year-old daughter, Alexis Olympia Ohanian. Sure, Serena is one of the biggest tennis players in the world and has so many people rooting for her on the sidelines of the court — but her daughter is definitely the cutest fan of them all. Seriously, people are loving that Serena Williams' daughter cheered her on during a tennis match on Friday — even if she was rooting for both sides. Oops.

Williams took to the tennis court on Thursday night during the Mubadala World Tennis Championships in Abu Dhabi, United Arab Emirates, where she competed against her older sister, Venus, according to HuffPost. Picking one sister to root for is hard enough, but imagine being related to them — the decision to root for one sister over another is probably even harder.

So it makes sense that, Serena's daughter, Olympia, was on hand to root for her mom and aunt during the match on Thursday night. In a video, shared to Instagram by Serena's husband, Alexis Ohanian, their daughter can be seen sitting on his lap, watching the tennis match happen right in front of her eyes.

Although she might have not known about everything that was happening, Olympia was more than supportive with clapping for her mom on the court — even if she ended up clapping for everyone.

"Olympia is such a good sport she clapped for every point — whether it was Mama or Auntie," Ohanian captioned the video.

You really can't blame Olympia for cheering both of her family members on. Although she loves her mom, she probably has just as much love for her Aunt Venus. And at the end of the day, isn't it better to root for everyone instead of one person?

The little girl looked adorable while she was cheering on her very famous, very talented family members. And Instagram users can not deal with her cuteness right now.

"She has the side to side head movement down!," one commenter wrote. "Too cute."

"This is the most precious thing ever," another commenter added.

And people on Twitter are basically freaking out over the video.

OK, so there was a very strong chance that Olympia had been rooting for her Aunt Venus, especially since she did end up winning the match over Olympia's mom, according to HuffPost — and Serena noticed, too.

After Venus claimed a rally, Serena reportedly spotted her daughter clapping from the court, according to Sport360. Serena reportedly started laughing after watching her and told her sister "she's clapping for you." But during a post-match interview, Serena said she was OK with her daughter rooting for the other team. Serena said, according to Sport360:

That's a classy baby, you know. She applauds both mommy, and my opponent, who happened to be her auntie. That was the highlight, seeing her clap, it was so cute.

It sounds like Serena and Ohanian are raising their daughter right with that kind of sportsmanship. And even Ohanian tweeted that he was proud of their daughter for doing this.

And at the end of the day, Olympia was probably showing off how excellent she is at clapping, which is a very important skill for babies and toddlers to have, according to The Bump. Babies communicate through clapping, according to The Bump — it shows that they're happy, excited, and allows them to gain rhythm. And Olympia certainly got all of her practice in while watching her mom's match on Thursday night.

Although Serena has said that she won't force her daughter to play competitive tennis, "unless she wants to," according to USA Today, her daughter looked more than amazed by the sport the other night. But maybe she was just amazed by how incredible the women in her life are. That's more like it.