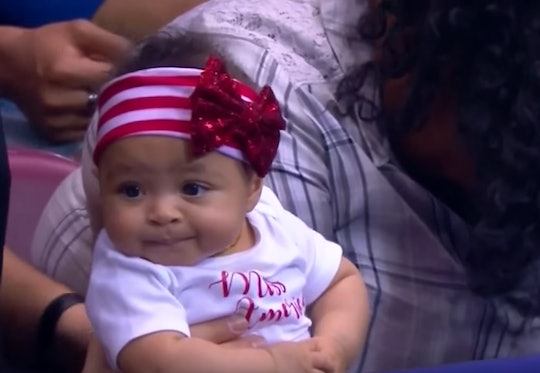 When Serena Williams got pregnant in 2017, fans could tell that she would be such a fantastic mother. And in the past year, Williams has proved just that. After welcoming daughter, Alexis Olympia Ohanian into the world with her husband, Alexis Ohanian, last year, Williams has shown that she is so happy to be a mom. And now that Serena Williams' daughter turned one year old today, it is clear that both mom and baby have grown so much in the past year, together.

This time last year, Williams gave birth to her first child — a baby girl named Alexis Olympia, a.k.a. Olympia, a.k.a. "Junior," depending on which parent is talking about her, according to Fortune. Williams kept silent about the birth of her daughter for 12 days, until she returned to Instagram to post the sweetest video, documenting her journey throughout her pregnancy for her fans. The video, made by Ohanian with iPhone clips that he had taken throughout the nine months of Williams' pregnancy, revealed their daughter's name for the first time, as well as the fact that her delivery didn't go according to plan.

Williams, Ohanian, and Olympia were finally able to leave the hospital after spending six days there and experiencing a "few complications," Williams said in the video. Although their start might have been shaky, both Williams and Ohanian were quick to document the life of their daughter, sharing photos of her with their fans on their Instagram accounts and to Olympia's Instagram account.

Based on all of the photos that they've posted, it's easy to see that the little girl has grown so much in the past year.

Through her Instagram account fans have watched Olympia learn how to walk, meet some pretty famous tennis players, watch her mom play in her first tennis match since giving birth, and travel the world — naturally. Olympia has probably accomplished a lot more in her first year of life than a lot of people accomplish at a much older age.

And being the dedicated and happy mom that she is, Williams can not stop talking (and bragging) about her daughter's progress in the past year, like any other first time parent raising a kid for the first time. Earlier this month, Williams revealed that she is teaching her daughter to speak French (just like her mama), according to People, and that her daughter is already expressing an interest in soccer, according to For The Win. Talk about one ambitious baby.

But, as previously stated, one year ago things were a bit different than they are now. Although Williams didn't state it at the time, a few months later, Williams revealed in an essay penned for CNN, that she almost died after giving birth.

When Williams delivered Olympia, she had to have an emergency C-section, which led to her having a hematoma, or a swelling of clotted blood, in her abdomen, according to CNN. After having surgery, Williams had to spend the first six weeks of motherhood in bed, recovering from her near death experience.

This could be the reason why Williams revealed in early August that she has not spent one day away from her daughter during her entire first year of life, according to People. "I'm so fortunate," Williams wrote on Twitter. Williams told TIME in August that she is obsessed with wondering what her daughter is up to during the moments she's not with her.

"I didn't think I'd be this attached," Williams said. "It's difficult to leave her."

Because of this, Williams told TIME that she is still finding a balance between being there for her baby all the time and taking some time for herself. This is so understandable — especially since Williams has said that she cried when Olympia took her first steps and she wasn't there to see it, according to People.

Williams will eventually learn how to take some time for herself now that her daughter is officially one year old and is slowly gaining her independence. After Olympia's first year of life brought so many accomplishments and milestones, it's pretty much guaranteed that this new year will do the same.

Based on everything that Williams has said about her daughter in the first year of her life, as well as the physical transformation that Olympia has made in the past 12 months — it's very clear that both mom and baby have done so much growing together. And they will have so many more years together to do just that.